Each of these film involves something that isn't human...sometimes not of this world...monsters - but not necessarily monstrous.

Family finds sasquatch and takes him home. Works in its own wacky family-friendly comedy way. Brilliant casting: John Lithgow in Lithgow mode, of course; Melinda Dillon as a deadpan-irked but also devoted wife and mom, duh; but a pre-Poirot David Suchet as a French bigfoot hunter?! GENIUS! Impressive makeup effects aid in Kevin Peter Hall's sweet execution of the titular Harry. I love a movie that knows what it is and embraces it.

The Lost Boys, Prince of Darkness, and more - after the jump..... 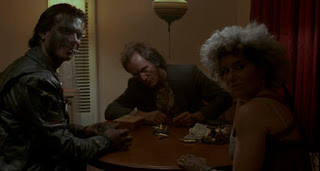 Young man follows a girl home to her vampire clan. Apparently, I only like Bigelow when she goes Dark (yuk-yuk). A terrific blend of horror and western genres, a great lesson to young men to just mind your fucking business, I don't care how aw-shucks sweet you think you are! No gothic beauty to be found here: it's dirt and dust, grime and gore, cruelty before the kill. Frightening and sad. 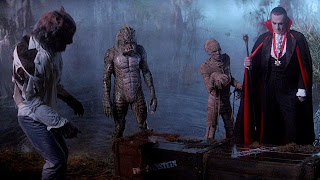 Kids must do battle against Dracula, the Wolfman, the Mummy, the Gillman, and Frankenstein's monster. I think I last watched this eight years ago. Surprised to find it doesn't really hold up. Too many characters, little respect for its womenfolk, and one of those movies where 1/3 of it is the climactic battle. Won't deny its Famous Monsters of Filmland pleasures, but disappointed. 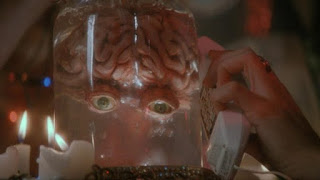 Riff on Blood Feast has two brothers finding victims to reincarnate the goddess Shitaar. Over-the-top horror-comedy delivers buckets of blood, performances played to the back balcony. It all works, cheapo makeup and all. These campy delights have campy ends. 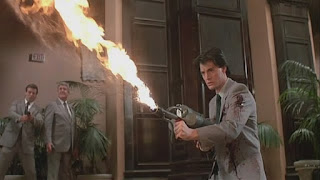 Cop and fed investigate spree-killings. Fantastic chase sequences, chilling kills, quirkily funny. Every second is a thrill, right up to the final, audacious moment. Pre-Twin Peaks Kyle MacLachlan plays an odd FBI agent from the Pacific Northwest, if you can believe it. 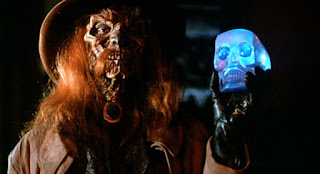 Guy inherits old home, finds family, adventure...and himself. A sequel to House in name only, more fantasy than horror. Surprises with wholesome messaging about the families we make and the legacies we honor. Adorable, hilarious, a blast. Plus: early appearances from Bill Maher and Amy Yasbeck!

Priest, physicists, and researchers investigate a mysterious cylinder whose contents could mean the end of the world. Upsetting throughout, a bleak meditation on the powerlessness of both faith and science to fully confront Evil. A sprawling cast, maybe too much so - the number of people who go off alone, then go off alone to look for the person who went off alone, is...a lot. Yet Carpenter gets away with it, not just because of his expert handling of atmosphere, suspense, and disturbing images, but because of the depth of the work, the questions raised, the debates held between Victor Wong and Donald Pleasence. 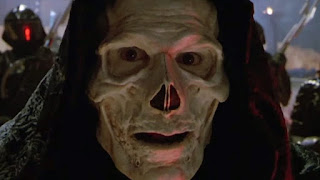 He-Man, stuck on Earth, must return to Eternia to save it from Skeletor. Introduces more characters than it knows what to do with. Makeup, costumes, sets: a hoot, impressive in scale, imagination, execution. I didn't mind it. 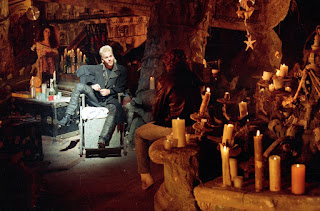 Brothers discover their new hometown is a haven for vampires. I love this movie, from the groovy ponytail saxophone man on the pier to the pot-loving grandpa, from Edward Herrmann's awful suits to the candle-lit vampire lair. Zeroes in on sibling dynamics without sacrificing depth of the mother - thanks be to Dianne Wiest! Great soundtrack, score.

Email ThisBlogThis!Share to TwitterShare to FacebookShare to Pinterest
Labels: 1987, Blood Diner, Harry and the Hendersons, House II, Masters of the Universe, Near Dark, Prince of Darkness, reviews, The Hidden, The Lost Boys, The Monster Squad