I love Best Original Song. It's such a kooky category for the Academy to stubbornly cling to, all while neglecting stunt performers, casting directors, and more options for hair and makeup. The 1980s were the heyday for this category, giving us TOP 40 hits and karaoke classics like "Fame", "Take My Breath Away", "Flashdance...What a Feeling", "I Just Called to Say I Love You" - and of course, this year's winner.


Honestly, I think the latter half of the 2010s is proving to be one of the stronger periods, as well, but take a look at the full slate of 1987's nominees and tell me this isn't a formidable lineup. Well, mostly.

"Shakedown" plays during the opening credits, as Axel Foley starts his morning back in Detroit, not yet aware of the alphabet crimes happening in Los Angeles. Energetic, pop-rock-y, and with an earworm of a refrain: "Shakedown / Breakdown / Takedown / Everybody wants into the crowded line." With lyrics related to LA and a pulse perfect for the movie's blend of action and comedy, it's a not-bad way to open the movie.

"Cry Freedom" plays during the end credits, just after the long, sobering list of names that have died in South African prisons without trial. You can hear the hope and beauty in the music, building up that cry in the last 60 seconds: "The children sing about the great ones who cry freedom for South Africa." A cry indeed - three minutes in, Jonas and the choir take up a shout - a cry of freedom, a call to action, an evocation of the fighters who have gone before. Would that the movie were as perfect as this song!

"(I've Had) The Time of My Life" is the final dance number where every story beat reaches an emotional climax: Johnny stands up for Baby, Baby shows what she can do on the dance floor, the lift is a success, the lower-class workers dance with the rich holiday campers, barriers are broken, cancer is cured, the Messiah returns. It's infectious. You can't help but agree: "I've had / The time of my life / No I never felt / This way before / Yes I swear / It's the truth / And owe it all to you..."

"Storybook Love" plays over the end credits, after the cast "curtain call". The movie's tongue-in-cheek, so maybe it's a choice that the music's a drag and the lyrics repetitive and stupid: "It's as real as the feelings I feel / Now he said, 'Don't you know I love you oh so much / And lay my heart at the foot of your dress?'" I'm not even sure that makes sense!

I'm still surprised that in a decade that wasn't shy about multiple nominations for a single film, Dirty Dancing only had one song in the mix ("Hungry Eyes"! "She's Like the Wind"!). But dammit, it's the right one - the one I vote for... 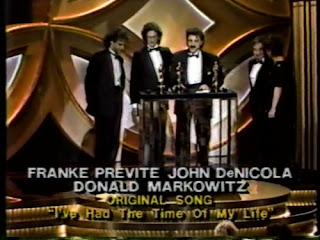 Tomorrow, the nominees for Best Original Score: Cry Freedom, Empire of the Sun, The Last Emperor, The Untouchables, and The Witches of Eastwick.