Robert Altman is my favorite filmmaker. I've seen 22 of his films (just a small dent in his filmography, but why blow through everything before I'm 30? Let me keep finding the gems!), and really only have a problem with two or three of them. He released an average of one film a year over a period of 40 years, making him one of the most prolific filmmakers in modern history. And wouldn't you know? He released two movies in 1987! Let's talk about them!

O.C. and Stiggs
scr: Ted Mann and Donald Cantrell, heavily rewritten by Robert Altman (uncredited), based on stories by Tod Carroll & Ted Mann published in National Lampoon
note: filmed in 1983, originally set for release in 1985, held over until 1987 as a burn-off to clear the home video release

IMDb Synopsis: O.C. and Stiggs aren't your average unhappy teenagers. They not only despise their suburban surroundings, they plot against it. They seek revenge against the middle-class Schwab family, who embody all they detest: middle class.

Producer Peter Newman and director Robert Altman pitched the film as M*A*S*H*ville, with Altman's typical kaleidoscopic chaos centered around the titular troublemakers. The studio, screenwriter, Newman, everyone was expecting a teen comedy in the vein of Animal House or Porky's.

What they got was a blistering critique of the genre. The "heroes" are cruel: even if they do target the affluent WASPs Altman equally disdained, the director does not let them get away scot-free even as anti-heroes. He highlights misogyny, homophobia, and racism as key components to 80s teen "romps", spotlighting then upending them: Cynthia Nixon's romantic lead calls them on their shit; the gay teachers harassed by the boys come out the other way with dignity; the Chinese character written off derisively by everybody - including his wife (and the heroes) - as a weirdo, less of a man, the Other, gets the last laugh in an explosive finale. John Hughes could never!

It's not a completely successful venture, the bile wears, but it's a fascinating curio, featuring one his best ensembles (that's Martin Mull above, and Jane Curtin's in it!), great sets, and surprising callbacks to Nashville - including the return of politician Hal Phillip Walker! 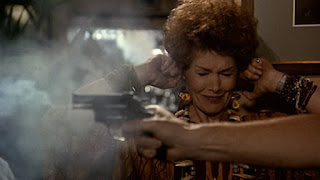 IMDb Synopsis: This is an insane and fast-paced romantic comedy about a bizarre dinner date among Bruce and Prudence, and their lunatic therapists, and Bruce's jealous, gun-wielding homosexual lover Stuart, and Stuart's over-protective mother, and a whole group of very odd New York characters. Will Bruce and Prudence find love amidst all the craziness?

Altman's actual 1987 production is an adaptation of Christopher Durang's hit play. Despite the New York setting, Altman shot in Paris, where he was living at the time. It is not discussed at all in Mitchell Zukoff's Robert Altman: An Oral Biography, while Patrick McGilligan's doorstop-sized Jumping Off the Cliff sums up the production, release, and reception in a single paragraph...in the epilogue. On his official website, Durang describes, "a very unhappy experience and outcome. Altman wrote his own adaptation of the play before I even began to write mine - which certainly wasn't the agreement. ...His version, in my opinion, throws the psychological underpinnings out the window, and people just run around acting 'crazy.'"

Hard to disagree. It's a mess of a movie, chaotic from the word go. Julie Hagerty seems lost, less a character than a series of random reactions. The mostly silent ensemble of French waiters, chefs, and customers run about like a nightmare, multiplying the insanity but otherwise adding little, narratively or thematically, to the story. Altman's camera, usually so dependable in catching little moments of transcendence, here searches desperately for anything interesting.

That said. Jeff Goldblum and Glenda Jackson stand out for being convincingly committed to the insanity, while Christopher Guest walks away with the whole thing with his subdued Corky St. Clair dry run. The movie comes together when he's on screen, it's funny, it makes sense.

Altman adapted two Harold Pinter plays for television, The Room and The Dumb Waiter, released together as Basements. He also contributed a segment to the omnibus film Aria, but that wasn't released in the United States until the following year; we'll watch it in future when we cover 1988.