I love Bernadette Peters. Don't you wish she was handing you an Oscar? I love even more that the Original Song nominations named the songs' performers. Do they still? It seemed new when I watched this presentation. Or old, I guess.


It should be no surprise that Top Gun's "Take My Breath Away" went home with the win. Sure, "Glory of Love" from The Karate Kid: Part II spent more weeks at #1, but "Take My Breath Away" was the music of Maverick, baby! It was the number one movie of the year - hell, it was the number one soundtrack of the year, nine times platinum, one of the best-sellers of all time! You can't compete with those numbers baby.

Except on an awards ballot. So let's take a took at the nominees - in order of my rankings, from the bottom to the top. After the jump.

"Life in a Looking Glass" from That's Life!
music by Henry Mancini
lyrics by Leslie Bricusse
ABSTAIN
I did not see this movie. Couldn't find it. Won't judge it.

"Glory of Love" from The Karate Kid: Part II
music by Peter Cetera & David Foster
lyrics by Cetera & Diane Nini
**
What on Earth? I don't even remember this song!

"Somewhere Out There" from An American Tail
music by James Horner & Barry Mann
lyrics by Cynthia Weil
****
Not my favorite of the film's songs, but there's a reason it was a hit. Hopeful, lovely, and what an emotional moment!

"Mean Green Mother from Outer Space" from Little Shop of Horrors
music by Alan Menken
lyrics by Howard Ashman
*****
So integral to the film's narrative, you can't imagine the production without it - of course, that takes a certain unfamiliarity with the source material, but isn't it perfect when a new song slips in without standing out?

"Take My Breath Away" from Top Gun
music by Giorgio Moroder
lyrics by Tom Whitlock
*****
Wonderfully executed in the film, as both the recurring love theme and in full during the sex scene proper. Honey! Take my breath away, indeed!

Yup! For the second day in a row, I side with the Academy and award my vote to... 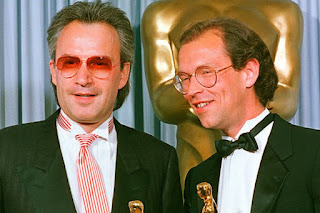 MORODER & WHITLOCK
for
"TAKE MY BREATH AWAY"
from
TOP GUN