As Babs said in 2010, the moment has come. The award for Best Picture could go to any one of these movies.

It could go to the romantic drama about a speech therapist who teaches deaf people to speak...and his love for a deaf woman who refuses to conform to his world, his standards.

It could go to the dramedy about three sisters loving and hating themselves, each other, and each other's husbands in New York.

It could go to the epic about two priests in the South American jungle, struggling to maintain peace, and their vows, as colonialism threatens the lives of the indigenous population.

It could go to the war flick about an intelligent young man who goes to Vietnam to fight alongside his fellow Americans, and witnesses the horrors and degradation of war.

Or it could go to the romantic-comedy about a young woman who becomes transfixed by Italy and spends the next summer fighting her own spirit.

Let Dustin Hoffman tell us who the winner is...


What stands out the most to me as I look at the old-school Best Picture presentation is the acceptance speech. Nowadays, it's customary for everyone to take the stage alongside the producers, a celebration for all involved. Here, it's more focused on the individual, and while Arnold Kopelson certainly deserves his moment in the sun, it feels almost anticlimactic. A night of a thousand stars...and we end on this guy standing on stage alone? After having to sit through Dustin Hoffman's monologue about...something?

Did it deserve it? Let's talk, after the jump...


Children of a Lesser God
Burt Sugarman, producer
*****
It doesn't matter how many times I see this movie, I am consistently moved by its humanity, surprised by its marriage of romance and politics. She's deaf, he isn't, but he's the one who doesn't hear her sounds so trite, but the filmmakers - all the way from the writers to the director to the performers - dig deep into the characters' humanity. It's specific, personal, and because of that, it rings true. And as for the sex: desire, connection, avoidance, great fun, an obligation, or sometimes just embodied by the way you move on the dance floor - the sex is complicated, layered, adult.

Hannah and Her Sisters
Robert Greenhut, producer
*****
Possibly the most heartfelt and naturally funny of Allen's "dramedy" output. It truly feels like a family, the actors sharing an easy-uneasy chemistry that relatives have. Life-affirming (Mickey seeing Duck Soup) and cynical (doesn't completely disagree with Frederick), hilarious ("I think it's a matter for your analyst. And mine.") and heartbreaking (Hannah's confusion and anger over Holly's script). Bonus hoot: everyone in Mickey's intro scene - Lewis Black, Julia Louis-Dreyfus, Christian Clemenson, John Turturro, Julie Kavner, J.T. Walsh, all in about thirty seconds.

The Mission
Fernando Ghia / David Puttnam, producers
****
The only Best Picture nominee that was brand new to me. Tricky material, this, as it tackles the difference between faith and religion, and the Catholic church's contribution to colonialism and the wiping-out of indigenous peoples. That's a lot to handle, while still setting things up for a climactic action sequence, but The Mission does so with an expert blend of populism and depth - shout-out to screenwriter Robert Bolt, of Doctor Zhivago and Lawrence of Arabia fame!

Platoon
Arnold Kopelson, producer
***
Eleven years after the Vietnam War, we were ready for a film that brought home the brutality witnessed by young men from both the Viet Cong and their fellow soldiers. It is chaotic, nightmarish, taking its time with the most savage sequences. Stone's pulling no punches, and that even includes showing us the appeal of violence, the power it gives, the groupthink that gives permission for a boy to become an animal.

A Room with a View
Ismail Merchant, producer
*****
Probably my favorite comedy, though often billed as a drama - perhaps because it's overwhelmingly beautiful. Not just visually - though, hell, it's gorgeous in that regard, a round of applause for the costumes, sets, and cinematography. It's in its story of a woman who gets out of her comfort zone and is forever transformed...if she can recognize it. It's in lines like "Things that are indelicate can sometimes be beautiful." It's in her older, spinster cousin also finding herself capable of passion, and helping it to blossom. I laugh, I cry, I find something new every time I watch.

Platoon, the Oscar Winner...is my fifth choice out of this lineup. My vote, when choosing between these greats, goes to... 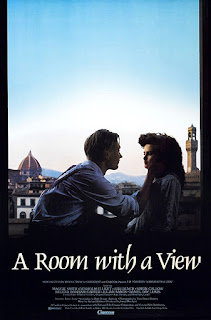 A ROOM WITH A VIEW
produced by
ISMAIL MERCHANT

Email ThisBlogThis!Share to TwitterShare to FacebookShare to Pinterest
Labels: 1986, A Room with a View, Children of a Lesser God, Hannah and Her Sisters, Oscars, Platoon, The Mission