Class of '86: No Shows, Double-Dippers, and Best Original Screenplay

We're back at the spaceship! And what an evening for no-shows, huh? The first two categories of the evening, and not only are both winners absent - this one didn't even send a proxy to accept on his behalf. And the way Shirley MacLaine handles it is...fun?


But, of course, Woody Allen is notorious for never going to the Oscars, for years claiming it interfered with his evenings playing clarinet with his Dixieland jazz band back east. In 40 years and four wins, he's only shown up once: post-9/11, presenting a tribute to New York in the movies.

We know at least three of his fellow nominees were there: actor Paul Hogan, who opened the proceedings, and not only played Crocodile Dundee but helped write the screenplay; Oliver Stone, whose Platoon lost here but went on to win big; and Oliver Stone, also up for Salvador. He's only the fourth writer to ever double-dip in this category; Preston Sturges did it in 1944, and Maurice Richlin and Stanley Shapiro did it in 1959, two of four credited contributors to both Operation Petticoat and Pillow Talk (which won!).

And as for the others? Well, let's discuss all of them, after the jump. 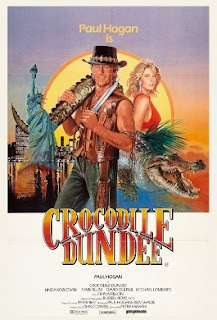 "Crocodile" Dundee
Paul Hogan & Ken Shadie & John Cornell
story by Hogan
****
Why settle for one fish out of water tale when you can have two? A New York journalist finds herself in the wilds of the Australian Outback; an Aussie bushman finds himself in the wilds of New York City. And not only do they learn about each other's cultures with humor and respect, they convincingly fall in love. The romantic rival is paper-thin, a conflict shoehorned for narrative necessity, but it leads to that wonderful subway scene, so who am I to complain? 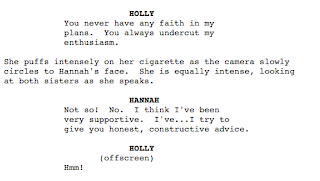 Hannah and Her Sisters
Woody Allen
*****
A fully-realized family, with all the love and tension every family experiences. They push each other's buttons, they know each other's weaknesses, and they all communicate so uniquely. Talkative Holly, desperately searching for her spotlight; shrinking Lee, hungry for ideas, but too willing to be filled rather than do the filling; and Hannah, who everyone leans on, but whose competency just barely conceals her exhaustion and frustration at everyone's incompetence. This is family.

My Beautiful Laundrette
Hanif Kureishi
*****
So much to love here. The avarice of Thatcher's England, and how that affects immigrants' perception of "making it". The tension between whites and Pakistanis, very simply summed up when the skinhead yells that "Pakis" were brought to serve, not become the master (take that, Empire). The hot hot hot gay romance at the central, with its unspoken secretiveness but also unspoken desire - it just starts up, and snap, you get what these boys' history is.

Platoon
Oliver Stone
***
Some troubles arise with characters - Barnes and Elias are symbols more than they are people (God bless Berenger!), some reactions are based more on twisting the emotional knife than they are in consistency. But the narrative is terrific, balancing its twin weapons of dread and boredom until giving way to chaos.

Salvador
Oliver Stone and Richard Boyle
***
The first third is kind of exhausting, with yuk-yuk hijinks about white people in the third world, and Stone's usual brand of subtlety. He's better at the political firebrand stuff: Richard's afternoon meeting with a diplomat and general, the priest's sermon before his assassination, that ending. A pretty great example of his strengths and weaknesses.

Well, well, well - there's always at least one or two categories where I agree with the Academy's choice. This is one of them. My vote to: 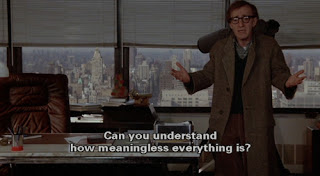 WOODY ALLEN
for
HANNAH AND HER SISTERS