Supporting Actor is interesting this year, in that it seems, to me, to consist entirely of the B Squad. Not to deride the accomplishments of these fine men, but most of them aren't even the Best Supporting Actors in their own films, much less of the whole year. The one actor I would argue belongs here is Dennis Hopper, and he's nominated for the wrong movie!

On Oscar night, Jeff Bridges and Sigourney Weaver presented - remember, the previous year's winners teamed up to do Best Supporting Actress - and good Lord people, could it be that presenter banter has actually gotten better in the 30 years since? Were they ad-libbing? Sigourney seems nervous, which is understandable; even though this is her third Oscars as a presenter, it's her first as a nominee, and Best Actress is still to come.


Then comes the anticlimax of a no-show winner - but fortunately, Weaver knows Caine, having worked with him in Half Moon Street, just released the previous September. So it's a sweet moment.

Anyways, after the jump, the nominees - the adulterer of Hannah and Her Sisters, the recovering alcoholic of Hoosiers, the dueling sergeants of Platoon, and the retired journalist of A Room with a View....

Tom Berenger as Sgt. Barnes
Platoon
****
Great credit to Berenger for not overly leaning on the villainous aspects of the role, giving Barnes an eerie calm instead, a magnetic confidence that would attract someone trying to live to see the end of a war. He's a survivor, he knows what he's doing, and he makes the tough decisions - that's what he thinks, anyway. And Berenger never lets this facade go, never gives Barnes a moment of doubt, no matter how monstrous his actions.


Hannah and Her Sisters
***
Woody Allen excels at writing selfish, sleazy assholes who, despite one or two moments of self-recrimination, are convinced of the purity of their romantic souls. Michael Caine was the first to get it 100 percent. He slaps his own wrist, he reasons, he knows why he shouldn't - but in those voice-overs, there's a half-heartedness that isn't present when he's waxing poetic about his wife's sister. The intellectual as dirtbag.

Willem Dafoe as Sgt. Elias
Platoon
**
Dafoe does an OK job, but the character, as it is, is underwritten. Elias' spiritual aura is tough to reconcile with a soldier who's made it up the ranks in Vietnam, and Dafoe does not do too much to convince otherwise. Who exactly is Elias? I don't think anyone knows. 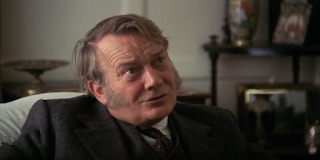 Denholm Elliott as Mr. Emerson
A Room with a View
****
Mr. Emerson is a former journalist, a "free spirit" of sorts, a man who dresses like a gentleman and thinks society's rules are nonsense. Elliott's muddled, innocent demeanor makes Emerson not just bearable, but lovable, and he subtly hints at some kind of illness that keeps him less active than he'd like to be. But it really is all about his last scene with Lucy, when he calls her on her shit - and Elliott nails it with the right amount of tenderness and strength of spirit.

Dennis Hopper as Shooter Flatch
Hoosiers
***
In many other performers' hands, the broadness of the portrayal would be a mark against it; with Hopper, it's sincere. The naked terror on his face the first time he's sober and in a suit grabs you - he wants to do better, to be better, to be the dad his kid deserves. Hopper's own attachment to this storyline grounds it in real feeling.

Caine won, and there are no 5-star standouts for me. But if I were to place a vote for anyone in this lineup, that vote would go to...

Tomorrow - Shirley MacLaine and her spaceship are back for Best Original Screenplay, where the nominees are: "Crocodile" Dundee, Hannah and Her Sisters, My Beautiful Laundrette, Platoon, and Salvador.