This was a tough Top Ten to make, and it changed shape many times - I wish I had room for Heartburn, Howard the Duck, and The Mission. But I don't. 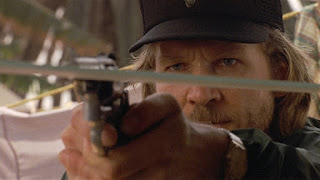 dir: Hal Ashby
scr: Oliver Stone & R. Lance Hill (as David Lee Henry), from the novel by Lawrence Block
cin: Stephen H. Burum
Apparently not a great experience for Ashby, and both he and the cast are on the record in saying the movie could have been more than the final cut. They want more? Jeff Bridges turns in one of his better performances as the alcoholic Matt Scudder; Andy Garcia's role as a "classy" LA drug lord is his best, and the two play off each other beautifully. 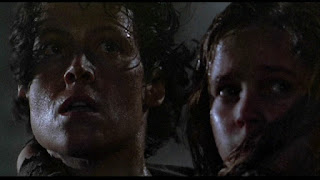 dir: James Cameron
scr: James Cameron, story by Cameron and David Giler & Walter Hill, based on characters created by Dan O'Bannon and Ronald Shusett
cin: Adrian Biddle
An imaginative continuation, shifting the "old dark house in space" horror of the original to a feminist action thriller. Really, this movie is the reason the franchise has lasted as long as it has, with its development of Weyland-Yutani, the xenomorphs, and Ripley. It's Cameron, so the action is stellar, the dialogue delicious. And Sigourney Weaver? A five-star performance, honey.


The rest of the ten, after the jump....
Blue Velvet

dir/scr: David Lynch
cin: Frederick Elmes
Your loss if you can't surrender yourself completely to Lynch's vision. Blackly comic subversion of suburban Americana, where the picket fences are white, the firemen are cheery, and just within the perfectly manicured lawns is death. Simultaneously chilling and funny, a strange cocktail that is unforgettable - and addicting!

Children of a Lesser God 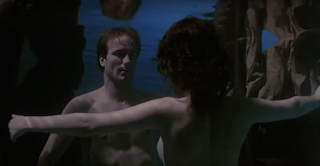 dir: Randa Haines
scr: Hesper Anderson and Mark Medoff, from the play by Medoff
cin: John Seale
As I wrote before: "It doesn't matter how many times I see this movie, I am consistently moved by its humanity, surprised by its marriage of romance and politics. She's deaf, he isn't, but he's the one who doesn't hear her sounds so trite, but the filmmakers - all the way from the writers to the director to the performers - dig deep into the characters' humanity... [Even] the sex is complicated, layered, adult." 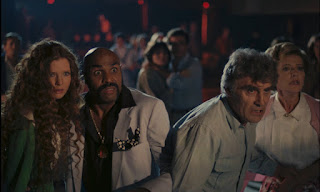 dir: Lamberto Bava
scr: Dario Argento & Bava & Dardano Sacchetti & Franco Ferrini, story by Sacchetti
cin: Gianlorenzo Battaglia
Operatic gore effects are the highlight, sure, but within this gem of Italian horror is a valentine to cinema, that intimate public forum where strangers gather together to experience deeply personal emotions. And wow, how the threat of your fellow patrons turning into violent demons really exacerbates those emotions! Looks beautiful, too. 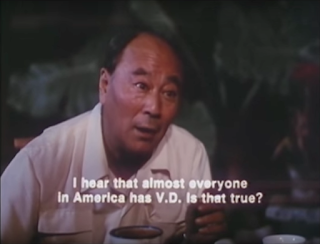 dir: Peter Wang
scr: Wang, co-written by Shirley Sun
cin: Robert Primes / Peter Stein
West comes East, underlining the differences between, and common heritage of, Chinese and Chinese-Americans. It confronts America's glass ceiling for immigrants, China's changing economy, the continuation of ping-pong diplomacy among teens, the pressure parents put on their children, fashion - it's the story of a formerly closed-off nation navigating its new relationship with the rest of the world. But honey - it's funny!

Hannah and Her Sisters 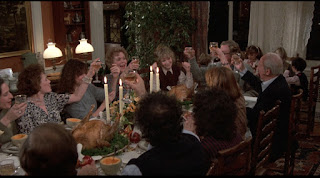 dir/scr: Woody Allen
cin: Carlo Di Palma
As I wrote before: "Possibly the most heartfelt and naturally funny of Allen's "dramedy" output. It truly feels like a family, the actors sharing an easy-uneasy chemistry that relatives have. Life-affirming (Mickey seeing Duck Soup) and cynical (doesn't completely disagree with Frederick), hilarious ("I think it's a matter for your analyst. And mine.") and heartbreaking (Hannah's confusion and anger over Holly's script)." 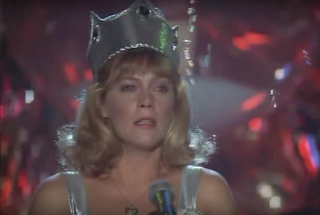 dir: Francis Ford Coppola
scr: Jerry Leichtling & Arlene Sarner
cin: Jordan Cronenweth
What would you do if you went back in time? What would you change? What wouldn't you change? And are some things just pre-destined, no matter what the circumstances? These are questions every time travel movie deals with, but Peggy Sue's journey feels more personal, and therefore more realistic, than others before it. Thank Kathleen Turner's performance, all wonder and cautious glee, and the intimate screenplay, focusing on her and family.

A Room with a View 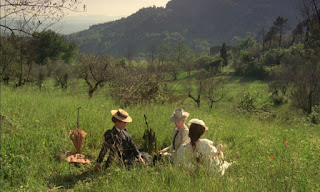 dir: James Ivory
scr: Ruth Prawer Jhabvala, from the novel by E.M. Forster
cin: Tony Pierce-Roberts
As I wrote before: "Probably my favorite comedy...overwhelmingly beautiful. Not just visually...[it's] in its story of a woman who gets out of her comfort zone and is forever transformed...if she can recognize it. It's in lines like "Things that are indelicate can sometimes be beautiful." It's in her older, spinster cousin also finding herself capable of passion, and helping it to blossom. I laugh, I cry, I find something new every time I watch." 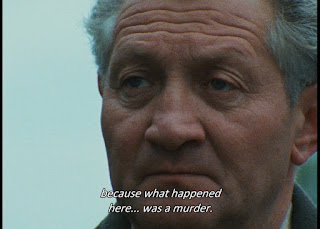 dir/scr: Claude Lanzmann
cin: Dominique Chapuis / Jimmy Glasberg / Phil Gries / William Lubtchansky
The Holocaust, as told by survivors, witnesses, and perpetrators. Locals near a former camp warmly greet a survivor upon his return...before further questioning leads them to casually condemn the Jews for having too much wealth and power. A camp commander sings a diddy taught to Treblinka prisoners, saying, "We laugh about it now, but really it's not funny." "No one is laughing," Lanzmann deadpans. Nine and a half hours and not a dull, excessive moment.

The 65 films screened were:


8 Million Ways to Die
The Adventures of Mark Twain
Aliens
An American Tail
April Fool's Day
Big Trouble in Little China
Blue Velvet
Caravaggio
Children of a Lesser God
The Clan of the Cave Bear
The Color of Money
Club Paradise
Crawlspace
Crimes of the Heart
Crocodile Dundee
Demons
Down and Out in Beverly Hills
Down by Law
Ferris Bueller's Day Off
Flight of the Navigator
The Fly
The Golden Child
The Great Mouse Detective
A Great Wall
Hannah and Her Sisters
Haunted Honeymoon
Heartburn
Hoosiers
House
Howard the Duck
Invaders from Mars
The Karate Kid Part II
Labyrinth
Legend
Little Shop of Horrors
Manhunter
The Mission
Mona Lisa
The Morning After
The Mosquito Coast
My Beautiful Laundrette
The Name of the Rose
A Nightmare on Elm Street Part 2: Freddy's Revenge
Peggy Sue Got Married
Platoon
Power
Pretty in Pink
A Room with a View
'Round Midnight
Ruthless People
Salvador
Shanghai Surprise
She's Gotta Have It
Shoah
Sid and Nancy
Something Wild
Stand By Me
Star Trek IV: The Voyage Home
Sweet Liberty
Tai-Pan
The Texas Chainsaw Massacre 2
Three Amigos!
Top Gun
Under the Cherry Moon
Water

Email ThisBlogThis!Share to TwitterShare to FacebookShare to Pinterest
Labels: 1986, 8 Million Ways to Die, A Great Wall, A Room with a View, Aliens, Blue Velvet, Children of a Lesser God, Demons, Hannah and Her Sisters, Peggy Sue Got Married, Shoah, Top Ten