Goodness! I had quite the weekend, so apologies for the lateness of this getting written and posted - but hey! I promised it would start this week, and I darn well keep most of my promises!

In my first post about this cinematic year, I set the scene a little bit regarding post-war Hollywood, what movies were focused on, and how a newly-emerging Blacklist would affect the industry for the next decade and change. The class most impacted were the writers, who were seen by the government as the brains behind "subversive" messaging in films...despite long being considered by their peers the low rung on the ladder.

That said, the category of today's focus, Best Original Screenplay, does showcase works whose themes warn against the dangers of capitalism, greed, and institutional decay, two of which were penned by alleged Communists: Charlie Chaplin, a British citizen, had his passport revoked, while Abraham Polonsky was blacklisted. Their films, Monsieur Verdoux and Body and Soul respectively, didn't win; nor did the Italian juvenile prison drama Shoeshine. Instead, the Academy bestowed their prestigious Oscar upon...The Bachelor and the Bobby-Soxer:


I know usually, I include a clip of the actual ceremony, but in 1947 we were still five years away from the first Oscars broadcast on TV. Actually, a lot was still different in this era. For instance, there were three categories for writing: Original Screenplay, which honored original works conceived of and written by the same source; Motion Picture Story, which honored original concepts/treatments by someone who not credited as screenwriter; and Screenplay, which honored works based on original motion picture stories or pre-existing properties.

Today, we focus on Original Screenplay. After the jump...


The Bachelor and the Bobby-Soxer
High school girl falls for a much-older artist. Her sister, a judge, convinces him to court her until the phase passes.
***
Sidney Sheldon

Less sordid in execution than it sounds, the film gets major points for having as its protagonist a female judge who's smarter than everyone else in the room. The when-will-they aspect of the judge-artist romance has a satisfying payoff that's consistent and concise - if only they actually spent more time falling in love! Amusing, but slight.

Body and Soul
The rise of a boxer from amateur to Champion, as he does whatever it takes to make the big bucks.
****
Abraham Polonsky

Although I wish it had more room to breathe - much of the actual boxing is covered in a pair of montages, and the timeframe is a little sketchy - it's just great. Our "hero" is likable, but there is no attempt to sand down his edges or make him smarter than he is; he's kind of a stupid guy who only has his fists working for him. The women are stock roles - worried mother, loyal girlfriend, gold-digging floozy - upended by their calculation and agency, in acting without deference to him.

A Double Life
An actor known to lose himself in his roles slowly loses his mind during a production of Othello.
****
Ruth Gordon & Garson Kanin

Suspenseful, and while not altogether subtle, it convincingly takes its time with the mental decay. Where it shines most is in the dialogue - if you've spent any time with show people, you'll recognize the authenticity of the backstage babble, of actors performing even when off-stage. They've also, fortunately, a great ear for non-showbiz types, such as waitresses, cops, and journalists. And what an ending!

Monsieur Verdoux
M. Verdoux turns to bigamy and murder in order to support his wife and child.
***
Charles Chaplin

Some fine comic scenes, especially surrounding Verdoux's marriage to the crass, ever-lucky Annabella Bonheur. Chaplin's critique of the capitalist system is laid on a little thick, particularly in its climactic speech where he equates his murders with perfectly legal war: "One murder makes a villain; millions, a hero!" This attempt to repeat the effect of The Great Dictator's finale rings smug and hollow here. 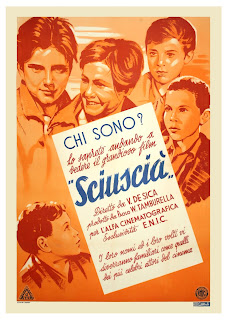 Harrowing in its depiction of juvie life, where the influence of older kids on younger ones has bigger consequences than it would in a school setting. Harrowing with its authority figures, who further corrupt the children with their own lies and manipulations. Humorous opening scenes and a real camaraderie between the main boys and their fellow inmates ground everything in tangible reality.

The Oscar went to Sheldon, but sorry, Sidney! I tip my cap and give my vote to the team of...

Day One down! Tomorrow, we look at Crossfire, The Egg and I, Gentleman's Agreement, and The Paradine Case, as Best Supporting Actress heats up in a fight between Gloria Grahame, Marjorie Main, Celeste Holm, Anne Revere, and Ethel Barrymore!