Ah, the writers! We're talking all writers, all the time today, beginning with Motion Picture Story. Story comes before the Screenplay - I believe it's a scenario or a treatment, something for the eventual screenwriter to work with. Although these are original stories, these are considered separate from Original Screenplay if they are the work of different writers. This also means that there is no Adapted category, but just Screenplay, denoting works based on either previously published material...or an original story not written by the credited screenplay author.

Many of these writers are here for the first and only time, but there are three with some Oscar history. Smash-Up's Frank Cavett already had an Oscar for the Screenplay to Going My Way, and won again for the Motion Picture Story of The Greatest Show on Earth; this is his second of three nominations. Dorothy Parker (yes, that Dorothy Parker) was previously nominated for co-writing the Screenplay to the original A Star is Born. And first-timer Valentine Davies would be back for the Motion Picture Story of It Happens Every Spring, the Story and Screenplay for The Glenn Miller Story, and the Documentary Short "The House Without a Name". Guess winning the Oscar this year really paid off! 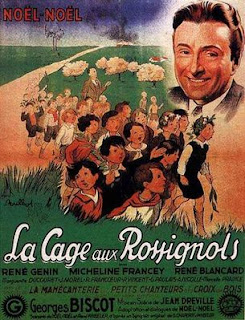 A Cage of Nightingales
story by Georges Chaperot and René Wheeler

I abstain. I was unable to obtain a copy of this film. 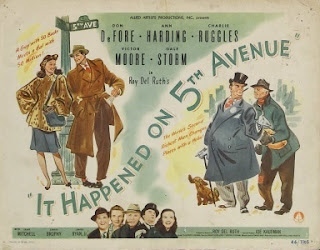 There's a homeless man with a dog who squats in a Fifth Avenue mansion during the winter since the owners spend the holidays in the South. The only daughter returns to the mansion as a runaway, and passes herself off as such to the squatter...and the squatter's new friend...and the friend's friends...and their families. She's happy enough, but then her father comes to town, and she convinces him to pose as a hobo in his own house - it's large enough for everyone, anyway. Then his estranged wife joins them and pulls the same trick. The daughter's love interest and his friends want to start a home for veterans, but the land they want has another bidder - the rich father. And then...

Look, the central plot is already unlikely, but this is a movie. Let there be fun and fantasy! But the subsequent twists stretch patience and credulity, and everything gets wrapped up in a cutesy bow. It's enough to put one in a diabetic coma. 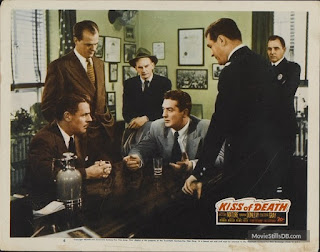 An ex-con is out on parole, but his rap sheet means he's unable to get a job. So he takes part in a robbery that goes wrong and winds up being the only one sent to jail for it - but he refuses to talk. Eventually, after x amount of years, he finds out his wife and daughter were not taken care of by the gangster who promised he would, and wife was driven to suicide. So he names names. Sprung from jail, he continues as a police informant...but a man he met in prison happens to be a psycho who gets his kicks from killing. And it's not long before our hero has to testify at psycho's trial...in a world pre-Witness Protection.

The story meanders a bit, sure, taking its good sweet time to set everything up - and truthfully, it doesn't have enough between our hero and his daughter. Still, when it comes to the suspense elements, it knows its stuff, piling on the pressure, sneakily drawing our hero and villain together, until the climactic showdown becomes inevitable - not because of the demands of genre, but because that's what makes sense. And oh, oh that ending! 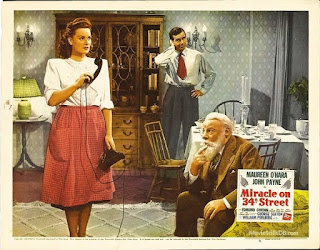 It's the Macy's Thanksgiving Day Parade, and Santa is drunk. Fortunately, there's a bewhiskered, gently-spoken elderly man nearby, so Karen Walker hires him to take over. He's such a hit, Macy's has him reprise this role at the flagship store. But Karen soon realizes that Kris Kringle - yes, that's his name - believes he is the real Santa. Karen's a practical woman who doesn't believe in fairy tales and has raised her daughter the same way, so this all seems crazy. Still, he's a hit at the store, and even Karen's daughter begins to think that maybe...possibly...could he be...? Anyway, one thing leads to another, and Kris winds up having to defend his own delusions (OR ARE THEY?) in court.

Full disclosure: I grew up with this movie, and friends know it's my favorite Christmas film of all time (of course, I hadn't seen The Bishop's Wife 'til this year, so maybe...time will tell). I think it speaks to the strength of the storytelling that I appreciate new wrinkles the older I get. There's a suggestion of fantasy that's held back just enough to allow an audience its own conclusions. The mom's arc from Cynic Who Hates Fairy Tales to Proud Supporter of Kris Kringle is expected but earned. And it gets to a happy ending without forcing characters into behaving out of character. 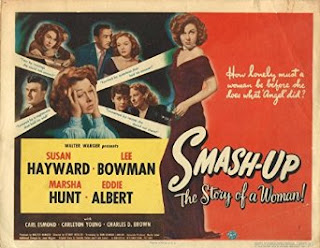 Smash-Up: The Story of a Woman
story by Frank Cavett & Dorothy Parker
****

Angie Evans is a nightclub singer on the rise, but she always needs two shots of bourbon to tackle her stage fright. She stalls her career so she can support her frustrated singer-songwriter hubby, convincing her agent to get him a job singing cowboy songs on the radio. The day she gives birth to their daughter, he sneaks in an original ditty written just for her - and it's a smash! He's the toast of showbiz! Parties, appearances, tours! But all the fame gives Angie stage fright, and you know what she does to tackle that. But then she uses it to fight boredom. And frustration. And jealousy. And to go to sleep. And to wake back up. Can anything save Angie from self-destruction?

Starts sensationally, and boy howdy it does not disappoint from there. Catfights! Drunken arguments! Kidnapping! A housefire! But it does not rest on sensation alone, oh no. It is, truly, an empathetic story of a woman battling a disease, one that looks "fun" at the beginning before it starts to subtly, imperceptibly take over. It's a story that lays out the facts, but does not offer a resolution, just baby steps. Perhaps its best trait is its handling of enabling elements; these are showbiz people, after all, who isn't drinking?

Davies won the Oscar, but ohhhh-ohhhhhhh it's such a tough choice between my favorite Christmas movie and a Susan Hayward addiction drama - and thinking only in terms of storytelling, not the dialogue. So, given all that, I give my final vote to.... 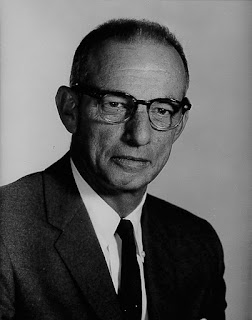 Email ThisBlogThis!Share to TwitterShare to FacebookShare to Pinterest
Labels: 1947, A Cage of Nightingales, Dorothy Parker, Frank Cavett, It Happened on Fifth Avenue, Kiss of Death, Miracle on 34th Street, Oscars, Smash-Up: The Story of a Woman, Valentine Davies