It Came True: Murder on the Orient Express, 2017

The day has finally come! I have seen a brand new Agatha Christie movie in the theater! Did it do the Queen of Crime justice? How did it compare to the many other versions we've watched and discussed? Was it any good? My dears, it's the exciting conclusion of Murder on the Orient Express week! 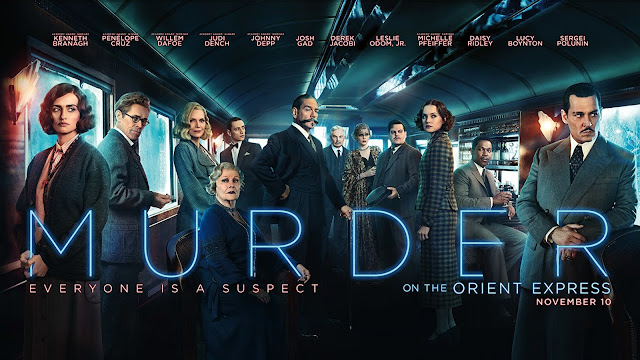 With
Tom Bateman as Bouc

If you've seen a Kenneth Branagh movie, then you know that the quality of his films tends to vary wildly from scene to scene (I think his four-hour Hamlet may be the only one that I can recommend without reservation, and I'm sure people disagree with me on that). But he never makes a shit film; rather, he makes very competent ones that here and there show a spark of genius, or at least something half-interesting. These can be performance-based sparks: Derek Jacobi in Dead Again, Jude Law in Sleuth, Cate Blanchett in Cinderella, etc. Often they come in the form of a great directorial flourish like the long take, as in the finale of Much Ado About Nothing. And whatever else may be, the elements considered "craftsmanship" are consistently perfect: the cinematography, the sets, the costumes, and especially the score, always by Patrick Doyle.

Murder on the Orient Express is very much a Kenneth Branagh movie. Not everything works, but what does work is a treat indeed. Once again, the "craft" elements stand superlative. Cinematographer Haris Zambarloukos, working in 65mm, gives the film a chilly blue tone that seems to darken the longer Poirot stumbles around. The train set, an expansive one that gives us a look at the kitchen, saloon, dining car, compartments, storage, and the caboose, is appropriately elegant, glamorous, first-class accommodations. I've already got my copy of the soundtrack, featuring Patrick Doyle's emotional score and an original song performed by Michelle Pfeiffer. Makeup? I've seen more than a few people deride the moustaches Branagh wears for the film, but they are certainly the most ostentatious, ornate lip sweaters I've ever seen - so, in a word, perfect. 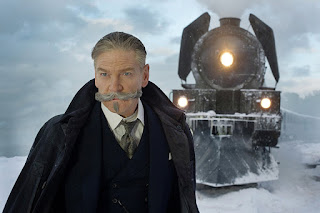 But when I say it's a Branagh movie, I don't just mean it bears his signature as a director. This is the Poirot show, and while he is the lead, it's one of the few times I can think of where he, not just his investigation, is the main focus. And darlings, Branagh does a delightful job. He obsesses over the symmetry of his eggs (yes! loved that inclusion!), giggles at serious literature (a clownish little gesture he somehow pulls off), even has that twinkle in his eye. At times he did not remind me very much of my Poirot, but then I thought of Peter Ustinov's response to Rosalind Hicks' similar objections and submitted to the filmmakers' interpretation. Once you've done that, you must concede that Branagh fares well in the role.

Perhaps you've noticed I haven't gotten to the rest of the cast, which tends to be the showcase of a Poirot film. Sadly, in a runtime that's just under two hours, much of the ensemble does not have time to shine. Besides Branagh and one other, the only actors who are given time and space to truly stand out are the young 'uns: Josh Gad, Leslie Odom, Jr., and Daisy Ridley. And they're great! I am here for the continued stardom of Daisy Ridley! Still, while the original film gave each member of its all-star ensemble a showcase scene, here much of the cast is given short shrift, with some even interrogated within a fucking montage. I don't know if that came about during editing, or if it was already there in the screenplay, but I wouldn't be surprised if it was the latter....

Screenwriter Michael Green seems certain about one thing: making his mark on an oft-told story. Not a single line of Christie's has been left untouched - even simple clues become overly-complicated in attempts to "gussy up" the narrative. There are four action sequences that take up time, but add little else. And then there are the attempts to humanize Poirot, such as the inclusion of a long-lost love whose portrait he insists on talking to periodically, stopping the movie in its tracks. All the more egregious since there are already two scenes where Poirot defends his seeming cynicism as subtle idealism. I could accept it if weren't so unnecessary. It's bloat. 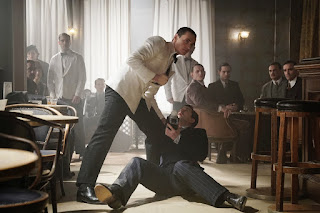 But, I will say this. I have seen every version of this story - you know because I've written about each one. I played the computer game. I own the BBC Radio adaptation on cassette. And the book itself? I own a couple copies and have read it twice. There's no surprising me with this story; the only thing to be done is to impress me with the execution. And honey, when the denouement came, and the accused reacted, and we flashbacked to see the crime, and experienced the fallout after...I gasped! I teared up! I had my hand pressed against my chest!

SPOILER CORNER - THIS IS THE ENDING FOLKS

I was moved! Never before has the frenzied anger of the perpetrators been so palpably enacted. Close-up, monochrome, whipping around, with the actors nearly hysterical. They even seem confused over who gets the knife next, where the others are. You feel the years of hurt, the trauma - and all set against gentle, somber piano music. And suddenly Michelle Pfeiffer, who's been fun as Mrs. Hubbard, suddenly walks away with the film as Linda Arden. It's real pain, and might be one of the best performances I've ever seen in any Christie adaptation. The cherry on top: she gets to perform the original song over the end credits, and from the lyrics, you know she is not singing as herself, but in character. Golly!

So, let us return to our questions.

Did it do the Queen of Crime justice? It presented an engrossing mystery that managed to shock, so yes. It dressed up her style in trappings that didn't work, so no. It was entertaining on its own, so who cares, really?

How did it compare to the many other versions we've watched and discussed? More emotionally affecting than most but also less cast-friendly; thematically, underlines to the point of near-irritation; refreshing in its focus on Poirot.

Was it any good? Oh my, yes. I certainly had issues with the script, but I loved Poirot, the sets and music and cinematography had me gagging, and that ending!