There Is Murder In Your Eyes: Murder on the Orient Express, 1974

Murder on the Orient Express is in theaters this Friday, undoubtedly my most anticipated film event of the year. Based on the novel by Agatha Christie, the world-famous whodunnit has Hercule Poirot traveling on the Orient Express when the train becomes snowbound...and murder strikes. The solution is simultaneously shocking and one of the most famous in literature. The mystery is glamorous, with Poirot interviewing thirteen suspects from around the world, from butlers and car salesmen to diplomats and royalty. It's the quintessential Christery.

Small wonder, then, that it has inspired filmmakers time and again over the years. Including the new film, starring and directed by Kenneth Branagh, there are five adaptations of Murder on the Orient Express. We're taking a look at each one every day this week, and what better place to start than at the beginning? Let's go back 43 years, so we can check out... 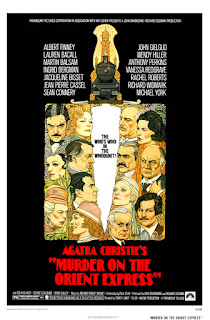 Producer John Goodwin was inspired to make the film by his daughter. During a visit to Russia for the release of his Tales of Beatrix Potter, he was struck by his daughter's refusal to participate in the regular tourist activities. Instead, she preferred to sit and read a book, one of those Agatha Christies...Murder on the Orient Express. And Goodwin figured if it was good enough to hold his daughter's attention, by God, it could hold a movie audience's.

The only problem, of course, was Agatha herself, who was done with films after the many disappointments of the 1960s and 70s. Fortunately, Goodwin's producing partner was John Brabourne, son-in-law of Queen Elizabeth II's second cousin Lord Mountbatten. Now, I've heard that Brabourne himself called up and appealed to Christie's appreciation of Tales of Beatrix Potter; I've also heard that Lord Mountbatten himself helped convince Christie. Maybe both are what it took, but in the end, she gave her blessing.

When people talk about the "all-star" Orient Express, they are usually referring to the cast, but behind-the-scenes was just as much a who's who.


And driving it all, director Sidney Lumet. He was already an Oscar nominee for 1957's 12 Angry Men (which went up against another Agatha Christie adaptation, Witness for the Prosecution), and had garnered respect among critics, the industry, and audiences through films like Long Day's Journey Into Night, The Pawnbroker, The Hill, The Anderson Tapes, and Serpico. Lumet loved the script; he also was in the mood for something fun, since he so rarely found success outside his broody genre. With Orient Express, he had found the perfect material - a glamorous whodunnit with a shock ending. And he knew just how to approach it, too. Just as the setting was a throwback to the 1930s, so, too, would he pay homage to the Grand Hotels of the era, with an all-star cast. 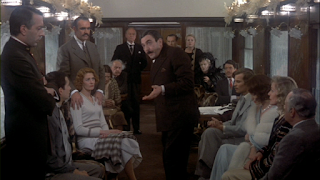 Ooh, and what an all-star cast! The first to sign on was also the biggest star at the time, a frequent collaborator of Lumet's: former 007 Sean Connery as Colonel Arbuthnot. Alec Guinness and Paul Scofield both passed on the role of Poirot, so Lumet signed on the much-too-young Albert Finney for the role; he did not disappoint. As word spread of Lumet, Connery, and Finney's involvement, the cast started filling up...


In addition to the "main" cast were character actors Colin Blakeley and Denis Quilley, both of whom would later appear in Evil Under the Sun; former Mercury Theatre player George Coulouris; and in a small, nameless role, John Moffat, who would later play Poirot to perfection in a series of adaptations for BBC Radio, Orient Express among them.

The gamble paid off. Firstly, the all-star cast got on like gangbusters. According to Lumet, the film stars were in awe of the theatre stars, and vice versa. But most importantly, the film was a hit! And I'm not talking just with critics, who would appreciate the old-school homage, but with audiences: this period piece mystery based on a 40-year-old book written by an old lady earned $36 million dollars, on a budget of $1.4 million! It became the eleventh-highest grossing film of 1974, right under Benji.

Critics loved it, the people loved it...and the industry loved it. Come Oscar time, Murder on the Orient Express was nominated for six Academy Awards: Best Costume Design, Best Cinematography, Best Original Score, Best Adapted Screenplay, Best Actor for Finney, and Best Supporting Actress for Bergman. Bergman won, making her the only performer so honored for an Agatha Christie film; it also put her in the rare company of three-time Oscar winners, alongside Walter Brennan and Katharine Hepburn. 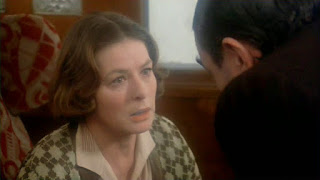 The film still holds up today. Everyone's having a damn good time, but no one's resting on that alone. The "craft" contributions from Bennett, Unsworth and Bennett still impress; more and more I think they're really the secret to what makes the film work. Bergman's performance is not as beloved as it once was; I myself feel Rachel Roberts deserved best-in-show accolades. But hell, 30 Rock built an entire episode around it - yes, there are plenty of Orient Express winks-and-nods on TV, but 30 Rock specifically referenced this movie, and expected its audience to know it. There's a reason.

Tomorrow, an Orient Express that went off the rails.