With the new Murder on the Orient Express in theaters tomorrow, we're taking a look at every adaptation of Agatha Christie's infamous novel. Each version has its own unique spin on the story. We've talked about the all-star cast of the original cinematic version, the updated setting of the 2001 TV Movie, and the serious themes of the 2010 TV movie. Today, a Japanese miniseries gives us...a lot. More spoilers than usual, so if you don't know the material, proceed at your on peril... 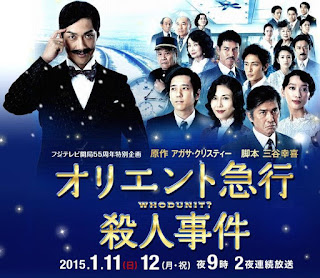 When I heard the Japanese mini-series based on Murder on the Orient Express runs almost five hours, I was intrigued by how they could possibly drag out the story for so long. After all, the original film is barely two and a half hours, and both TV movies run 90 minutes. Is there added action? Extended interviews? Surely not a new romance...right?

I stopped worrying as soon as I started watching, so engrossed was I by the production. Taking place aboard a "special Orient express" in 1930s Japan, Part One of the mini-series adheres to Christie's original novel almost word for word. Oh sure, there's no snowfall to blame for the train's delay, but a rockfall, and there are more than a few jokes about dried puffer fish, and of course the names and some contextual references are altered to fit the setting. Otherwise, it's the same exact story, right down to the solution, which sure enough comes to light at the two-hour mark. Another 24 minutes to wrap things up and then...a reminder to tune in for Part Two.

What the fuck could Part Two be?

They did the whole novel (save Poirot's final decision) - what more is there? 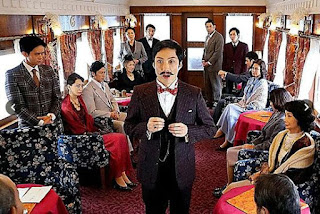 Let Christie herself explain, via lines from the 1944 novel Towards Zero, which we've discussed before:


"A murder is the culmination of a lot of different circumstances, all converging at a given moment at a given point. People are brought into it from different parts of the globe and for unforeseen reasons. The murder itself is the end of the story."

Yes, the next two and a half hours trace the journey each passenger took to get to the Orient Express. It goes back to the night the child at the heart of the motive was kidnapped, and so not only do we meet her and her parents, but the whole extended household as she knew them - including the maid who would be accused of conspiring with the kidnappers. We witness firsthand the deaths and suicides that follow. We experience the outrage when the guilty party walks away, a free man.

But holy shit, then we get to see just how everyone went from mourners to avengers! Behold as we sit in on discussions of how to kill the eventual victim; when is best to strike; who should be involved. There are even aborted alternate plans discussed and nearly executed! Once we board the Orient Express, we live alongside the conspirators as they panic over what to do with the presence of world famous detective Takeru Suguro, hatch a scheme, and see the whole house of cards tumble before them.

In expanding the story to include the past, writer Koki Mitani is less concerned with defining justice than he is in exploring what drives good people to kill. He doesn't pay lip service to the happy home life of the Gorikis, but shows us the very real warmth and intimacy felt by all who knew them. Also acknowledged is not just the difficulty of going through with a murder, but the post-traumatic determination to hold on to rage. As one character says, "The more we wait, the less angry I feel - and I need to hold on to that anger!" By the end, when Suguro has decided to present police with the fictional murderer scenario, some are left with an empty feeling - now what? It is implied that many will never see each other again, strangers forever bonded by a dark secret.

Not to imply that this is some dour meditation on vigilante justice. For the most part, it's a high-spirited lark. It's five hours, but it's five engrossing hours, with beautiful costumes and a heavy-hitting ensemble. And I must pay special tribute to Mansai Nomura, who plays Poirot stand-in Suguro like a feline ringmaster - watchful, fussy, mischievous, complete with those famous moustaches. He's the crown jewel in an already classy, imaginative adaptation.

Tomorrow...well, who knows? I'll post some more 1947 reviews, and I'm definitely seeing the new Murder on the Orient Express, but I may have to wait an extra day before reviewing it. You don't mind, do you? Of course not....