Thor: Ragnarok's abrasively absurdist/jocular tone is annoying, condescending - we're the fun one, we can take the piss, check out this soft-spoken polite rock monster, Loki's such a twat, haw-haw-haw. Marvel films already feel like filler; this one's an aside within a footnote. Cate Blanchett's villain and her whole plot are approached with shrugging obligation. But boy oh boy, the score by Mark Mothersbaugh is one of the best of the year, the one element that truly grounds the fun in emotional resonance. (dir: Taika Waititi, scr:  Eric Pearson and Craig Kyle & Christopher L. Yost, based on the comics by Stan Lee & Larry Lieber and Jack Kirby)

The latest from Denzel and Julia Roberts after the jump....

Three Billboards outside Ebbing, Missouri had me shifting in my seat, wishing I had a watch so I could check the time without disturbing others. The acting's good all around, I guess, but the actual screenplay - the on-the-nose dialogue, the so-what plot turns, the clumsily-written exposition, the is-this-going-anywhere of it all - plods. Minority characters feel like token props, easily labeled (The Black Cop, The Black Friend, The Midget), no complexity or interior life. There's a long, spittle-filled speech against the priesthood that's out of place, but got applause from my Hollywood audience - it's exemplary of the whole movie, an easy toss to likeminded fellows who get to laugh at these slackjawed morons before patting themselves on the back for acknowledging their "complex" humanity. (dir/scr: Martin McDonagh) 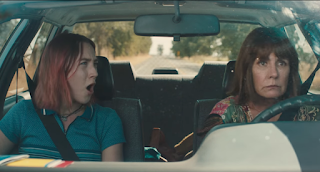 Lady Bird gets so much right about high school friendships and teenage love and parent-child frustrations. The strained relationship between Lady Bird and mom Marian is the heart of the movie; like last year's masterful 20th Century Women (or, duh, real life), it's one that doesn't have any traditional resolution, nor does it culminate in total understanding. Instead, every now and then, each lets the other sneak a peek under the armor. And every relationship feels this genuine. Every moment is this real. I love this movie. I love it. I love it. I love it. (dir/scr: Greta Gerwig)

Wonder knows just what buttons to push to get you laughing or crying. Surprisingly generous in its attitudes towards frustrated siblings, unfulfilled parents, and even schoolyard bullies. Occasionally diverts to follow one of the supporting characters, complete with intertitle, a neat idea somewhat squandered by inconsistent execution and increasing disinterest in those characters. Still, a heartfelt, effective movie, and I'd be remiss not to talk about Julia Roberts, who had me in tears just by sitting at a table alone, or pointing, or...breathing. The kids are great (Izabela Vidovic, y'all!), but Roberts walks away with the film. (dir: Stephen Chbosky, scr: Chbosky and Steven Conrad and Jack Thorne, based on the novel by R.J. Palacio)

The Foreigner looks to be in the same territory as Taken - father with special skills tracks down the people who've harmed his daughter - except here the daughter is dead and dad really won't listen to reason, because as far as he and the audience knows, the men he's targeting are just as much in the dark as he is. It's a fascinating way of portraying grief, not as an emotionally crippling catatonia, but as a call to action, forcing logic and justice to prevail in the wake of something senseless; that Jackie Chan's is not the only character resorting to violent means for that reason makes it stand out all the more. Cuts much deeper than I expected. (dir: Martin Campbell, scr: David Marconi, based on the novel The Chinaman by Stephen Leather) 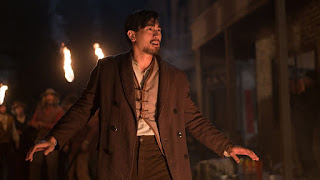 The Jade Pendant is a historical romance that climaxes with the real-life mass lynching of 19 Chinese immigrants in Los Angeles in 1871. Godfrey Gao is almost distractingly sexy. I was already on board, and I'm on record as wanting him for the live action Mulan, but here he's a rustic Western hero who invents chop suey and treats women well and is just fucking hot. Dear Lord. It's nice to watch him lead a film surrounded by a cast of Asian-American heavy-hitters like Tsai Chin and Tzi Ma. However. The script sounds sexy but is directed without any feel for sensuality or eroticism, and many were the times when a cut confused rather than clarified the action. Dismal cinematography. Low production values, but most competent filmmakers can hide that. (dir: Po-Chih Leong, scr: David Assael and Scott M. Rosenfelt, based on the book by L.P. Leung) 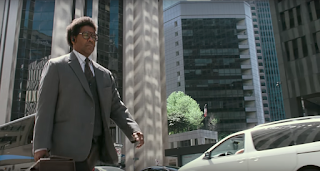 Roman J. Israel, Esq., like Dan Gilroy's previous flick Nightcrawler, examines our moral compass via a blackly comic, unusual character study (adjective applicable to either word). Denzel Washington is completely transformed - not just the hair and the glasses and the teeth, but the stammering, clopping along, never looking anyone in the eye, mumbling and shrugging yet with confidence. He's in every scene, every shot, his movie and dammit, he's great. So is Carmen Ejogo, who I wish had more to do than being awed and rejuvenated by Roman, but is an effective presence nonetheless. As is James Newton Howard, whose score was an immediate post-film must-have for me. The ending doesn't totally work, the film's a little weird, but I for one found it worthwhile. (dir/scr: Dan Gilroy)