Law or Order: Murder on the Orient Express, 2010

With the new Murder on the Orient Express in theaters this Friday, we're taking a look at every adaptation of Agatha Christie's infamous novel. Each version has its own unique spin on the story. We've talked about the all-star cast of the original cinematic version and the updated setting of the 2001 TV Movie. Today, the definitive Poirot takes it on, with a much more dour tone... 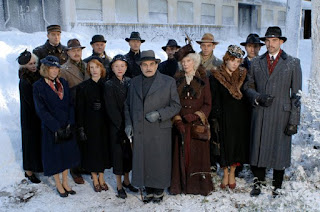 We've talked before about the big changes Agatha Christie's Poirot went through starting with season nine in 2003, going from very quaint weekly mysteries to darker, 90-minute cinematic mood pieces. There was also less pussy-footing about regarding intentions: from the moment the series returned, producers were very open that they wanted to do Murder on the Orient Express, but not until they were able to line up a cast worthy of the title. Another all-star rendering, with David Suchet at the center? Delicious....

Of course, the all-star cast they did line up was chiefly an ensemble of familiar British character actors: Eileen Atkins, pre-Downton Abbey Hugh Bonneville, Toby Jones, David Morrissey, Samuel West, etc. But true to the producers' word, there were some surprising faces: Haneke regular Susanne Lothar, The Diving Bell and the Butterfly's Marie-Josée Croze, Inglourious Basterds' Dénis Menochet, and of course, Academy Award-nominated star of Beaches and Hannah and Her Sisters Barbara Hershey. Taking on the crucial role of Mary Debenham was a young up-and-comer named Jessica Chastain, just one year before she found fame and an Oscar nod of her own in 2011 with The Help, The Tree of Life, The Debt, Take Shelter, and Coriolanus (in which she co-starred with O.G. Mary Debenham Vanessa Redgrave). 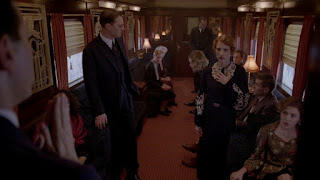 But unlike the '74 original, the cast was not the selling point of this adaptation; nor was it the setting, as in the '01 TV movie. This time around, it was the original questions raised by Christie about justice: what is it? Who determines it? Can murder be justified?

Again, if you are somehow unfamiliar with the ending of Murder on the Orient Express, stop reading now....

The only reason the Belgian super sleuth is investigating at all is due to the train being snowbound; it is up to him to solve the case and present the solution to the police when they eventually arrive at the next station. When Poirot realizes that the motive behind the murder is retaliation for the victim's decades-earlier kidnapping and murder of a child, he sets to work laying traps for every possible suspect. Famously, every possible suspect is actually involved in the murder, part of a carefully-organized plot by people whose lives were forever disfigured by the deaths Ratchett left in his wake. This leaves Poirot with the choice to either blame the murder on some mysterious, fictional killer who got away (evidence of whom has been planted by the conspirators), or to present the actual facts and send the thirteen involved to jail.

Poirot was always reluctant, in both the book and subsequent adaptations. He has dedicated his life to upholding justice, no matter who the victim is. His moral righteousness in this regard isn't just his profession speaking, it's his faith. Though rarely, briefly explored in Christie's own writings, Poirot is a staunch Roman Catholic, and this adaptation emphasizes that fact frequently: Poirot praying before bed, Poirot connecting with the missionary Greta Ohlsson on a spiritual level, Poirot clutching a rosary in his hands as he agonizes over what solution to give to police. Murder is to be punished, yet this murder would not have occurred had justice been properly served in the first place. In the book, Christie is asking Poirot (and readers) to go against everything he's believed and espoused in the 14 years he's been published; in the TV movie, it's the people's Poirot of 21 years who is tasked with this decision. 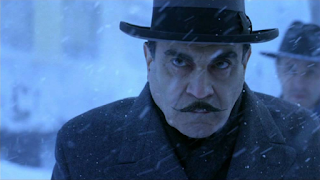 As Poirot has said throughout the series, when you have taken a life once, it becomes increasingly easier to take another. This almost happens at the film's climax, when Colonel Arbuthnot threatens to shoot Poirot to protect the rest. It is Mary Debenham, always the brains, who convinces him otherwise - killing Poirot would make them animals, just like the man they murdered. That was justice; this would be murder. Arbuthnot relents, but that brief, tense passage is what Poirot's whole point is: murder begets murder, and every killer can justify his or her actions. It doesn't take much.

Poirot sides with the conspirators, as he does in every version. But while the two previous adaptations follow that decision with a sigh of relief, this one ends with Poirot battling tears and his conscience as he walks away in the snow. There is no celebratory toast among the guilty, no catharsis. We are left to decide for ourselves if Poirot made the right choice. It is, without question, the bleakest Murder on the Orient Express to date.

Tomorrow, Japan takes five hours to tell the same story...and then some!