All month long, we're celebrating the Queen of Crime as she and her works appeared on screen, with a grand finale of five Murder on the Orient Expresses the first full week of November. Next week is Miss Marple Week, but today, we conclude our look at the main source of her bread and butter, the little Belgian himself, Hercule Poirot.

The history of Hercule Poirot on screen has been, as we've seen throughout this week, quite a rollercoaster. Whether they were comical, Oscar-nominated, prolific, animated, or meta, each Poirot received equal amounts praise and criticism. Maybe Christie was right in her initial assessment of bringing Poirot to the stage: maybe he was too much on the page for an actor to do proper justice.

And then came David Suchet. 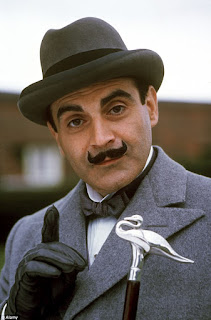 Suchet was no stranger to the world of Agatha Christie. When Ustinov took Poirot to the small screen in Thirteen at Dinner, Suchet took on the role of his Scotland Yard rival Chief Inspector Japp - he would later characterize it as "the worst performance of my career." Ironic, then, that Christie would also allow him to give the best performance of his career, one that lasted 25 years, and which, from the outset, was regarded as the definitive portrayal of any Christie character - even Rosalind Hicks said so!

Premiering in 1989, Agatha Christie's Poirot was, for the most part, a faithful adaptation of Christie's short stories, albeit zhuzh'd up a bit to pad the running time, or to fit members of its principal cast into the proceedings. Hugh Fraser became a fan favorite as Captain Hastings; Philip Jackson was such a perfect Chief Inspector Japp, he would later the reprise the role for BBC Radio; and Pauline Moran's Miss Lemon makes you forget how small a role that character actually played in the original stories. With its engaging cast, witty scripts, art deco design and 1930s setting (seemingly every case took place in 1935!), it was like a glamorous Murder She Wrote. 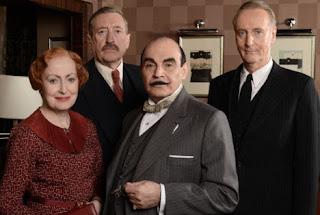 And at the center of it all was Suchet, padded up, wearing several fancy mustaches, with mincing gestures and a curious quick-step that further captured the little eccentricities of this bizarre little man. Suchet even fought with a director over whether or not Poirot should put down a handkerchief before sitting down on a bench, a disagreement borne out of Suchet's research: he had read every story and novel, and kept a substantive file on Hercule's mannerisms and history. That attention to detail explains, perhaps, why there are several Miss Marples, but only one Poirot.

Suchet played the role from 1989 through 1996, completing 36 short stories and nine novels. The series was briefly revived from 2000 to 2002, where another four novels came to the screen, and then came a big change. New producers came on board, and new writers took over from former standard-bearers Clive Exton and Anthony Horowitz. When the new season premiered, it was a darker, grimmer, yet more lavish and cinematic Poirot that greeted viewers. And with that change came a more tired, humorless, righteous, furious Poirot, one without Hastings, Japp, or Miss Lemon.

Truthfully, it's a mixed bag. Among gems like Hallowe'en Party and The Hollow are productions that are either forgettable (Taken at the Flood, Three Act Tragedy) or downright lamentable (The Clocks, Appointment with Death). It's a pendulum of quality that mirrors Christie's own writing; when you're that prolific, they're not all going to be winners. Besides, it's a gas seeing Suchet in his element, and with a number of actors right before they hit it big (Emily Blunt in Death on the Nile, Michael Fassbender in After the Funeral).

The point is, in adapting every single novel and short story featuring the character, Suchet guaranteed that he wouldn't just be this generation's Poirot, but The Poirot. And so, much how it was difficult for readers to say farewell in 1975, viewers readied themselves for the series finale in 2013. 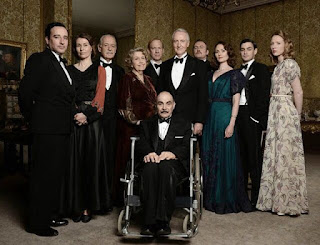 With
Hugh Fraser as Captain Hastings
David Yelland as George 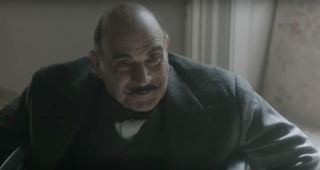 The first novel, The Mysterious Affair at Styles, had a young Captain Hastings team up with Belgian refugee Hercule Poirot to solve the murder of a family friend at Styles Court at the end of the First World War. The final novel, Curtain, has a grey, widowed Captain Hastings returning to Styles Court, now a guest house, where an ill Poirot is spending his last days confined to a wheelchair, years after the Second World War. But of course, there is more here than meets the eye: Poirot has called Hastings to him for one last case. He knows there is to be a murder...but he knows neither the victim nor the killer.

It is fantastic to see David Suchet and Hugh Fraser together again, and Curtain provides a great acting showcase for both of them. With Poirot incapacitated, Hastings is the one walking about, making conversation, being the eyes and ears of his dearest friend. In keeping with the novel's tone, as well as that of latter-day Poirot, the episode has an air of melancholy throughout, with a color palette of greys and dark chocolates. The question of murder as a service is also raised, as in previous entries Appointment with Death and Murder on the Orient Express, and one cannot help feeling that the events of the latter have influenced Poirot's thoughts on the subject. Poirot is also noticeably more short-tempered with Hastings, and to see Fraser's "dash it all" frustration and hangdog embarrassment at the beratement is painful to watch. 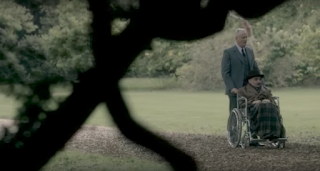 Not as painful as their final scene, however. The latter seasons began emphasizing Poirot's Catholicism, and so we see him clutching a rosary, asking Hastings in a hoarse voice if he thinks God will forgive him. Hastings reassures Poirot that he is a good man, the best of men. It's a beautiful moment between the two of them. More than twenty years after the first episode, Suchet and Fraser have not lost their chemistry.

They are aided by a who's who of Christie repertory players, both on-camera and behind it.  Helen Baxendale, Anne Madeley, Aidan McArdle, and Anne Reid all appeared on Marple (Anne Reid's was directed by Nicolas Winding Refn!). The director, Hettie MacDonald, helmed The Mystery of the Blue Train for Season 10, as well as an episode of Marple. The writer, Kevin Elyot, also scripted Death on the Nile and Five Little Pigs, probably one of the best episodes the series ever produced. It's an entire crew, a whole ensemble, saying goodbye.

The novel ends with a long letter written by Poirot, to be read by Hastings after his passing - yes, even in death, Poirot sees what his best friend cannot, solves the case, and gets the final word. The film, and the series, follows suit. It's an emotional ride, and even allows Poirot to, somehow, show more agency, more clarity, than before. When all is revealed, he signs his name. Looks up.

And shares one last look with his other dearest friends and constant companions. 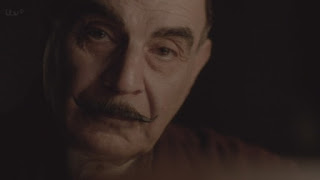