All month long, we're celebrating the Queen of Crime as she and her works appeared on screen, with a grand finale of five Murder on the Orient Expresses the first full week of November. Today, and all this week, we're looking at Miss Jane Marple. Yesterday, we took a look at the first film to bring her to the screen, Murder, She Said. Today, a Miss Marple movie about the movies... 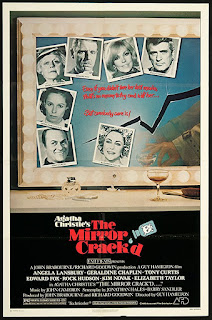 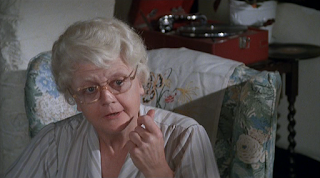 When one Agatha Christie detective brings in the money, it's only natural to put the other one to work. Just as MGM followed up four Miss Marples with a Poirot in the 60s, EMI-Paramount followed up their first two Poirots with a Marple. The big challenge, of course, is that all-star cast conceit, hard to do when most of the source material is about sleepy English villages. Jane simply didn't get out as much as Hercule. Fortunately, she didn't have to - because in The Mirror Crack'd, the stars came to her!

Based on the 1962 novel The Mirror Crack'd from Side to Side, the 1980 film sees Hollywood stars coming to St. Mary Mead to film a movie about Mary Queen of Scots. The director and his leading lady wife have bought Gossington Hall from Miss Marple's BFF Dolly Bantry, and host a village fête on the grounds. And, of course, someone winds up being murdered, and Miss Marple must investigate. Kind of.

Despite the allure of Hollywood glamor, The Mirror Crack'd is one of those Marples that sees the old biddy laid up at home, giving Angela Lansbury very little to do besides sit around in old age makeup and look smug. Which Lansbury does well, but it ain't exactly Albert Finney singing "Animal Crackers" before cackling over clues. Even in her laborious introduction sequence, which sees her using her deductive skills to spoil the ending of a movie for the rest of the village, Lansbury's Miss Marple isn't so much winningly nosy as she is annoyingly superior. How do people stand this woman? Edward Fox does the heavy lifting as Inspector Craddock, while the rest of the ensemble has little to do besides overact and trade barbs.

Thank God for that, actually. Because if there's one thing The Mirror Crack'd provides in spades, it's camp delight, even if it's front-loaded in Taylor and Novak's first confrontation scene:


Novak's got the better lines, but Liz's final blow is my favorite in the whole movie.

Apathetically directed by Guy Hamilton, The Mirror Crack'd is deader than Heather Babcock. Lansbury herself calls the film "terrible", while plans for a sequel (to be based on A Murder is Announced) never materialized. It was the last time, at least in the US/UK, that Miss Marple made it to the big screen.

She's found great success in television, however, and we'll talk about that Miss Marple tomorrow.