Trial and Terror: Witness for the Prosecution, 1957

All month long, we're celebrating the Queen of Crime as she and her works appeared on screen, with a grand finale of five Murder on the Orient Expresses the first full week of November. Today, and all this week, we're focusing on her standalone works. Yesterday, we talked the page to stage to screen transfer that made "Philomel Cottage" into Love from a Stranger; today, a similar trick is performed...

The story was popular enough to inspire adaptations on its own, including an episode of Lux Video Theater with Edward G. Robinson. But Christie herself wasn't satisfied with the story as is. A slight spoiler here, but part of the shock in the story involves, of course, the revelation of the true murderer, who gets away with the crime; Christie felt the culprit should not go completely unpunished. She also thought it was quite a good plot (if she do say so herself), and didn't want it completely confined to short fiction. So she set about expanding it, for a medium she had gotten quite good at...

The end result was the stage play, which Christie would later name her personal favorite of her 19 theatre works, and which became a smash hit on the West End and Broadway. Oh, yes, I know I said that about Love from a Stranger, but that show's comparatively limited runs cannot rival Witness for the Prosecution. In the West End, it ran concurrently with Christie's The Mousetrap and Spider's web, making her the only female dramatist to have three shows running simultaneously. The New York production alone ran 645 performances, winning Tony Awards for its leading players, Francis L. Sullivan (a friend of Christie's) and Patricia Jessel.

When you're a hit on the page and a smash on the stage, the next step is obvious: HOLLYWOOD! And boy howdy, did Hollywood deliver.... 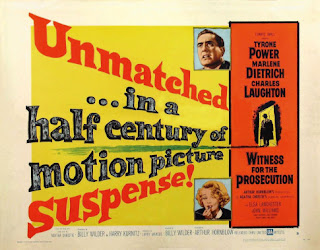 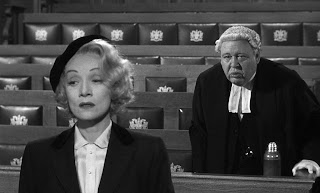 Released four years after the play's London premiere, Witness for the Prosecution is a great example of top-tier Hollywood filmmaking in the post-War era. Just behind-the-scenes alone: the studios behind it were MGM and United Artists, the latter of which was fresh off back-to-back Best Picture wins for Around the World in 80 Days and Marty. Then-five-time Oscar Winner Edith Head did Dietrich's costumes. A full recreation of a courtroom in London's Old Bailey was built on a soundstage - the detail is fantastic, rewarding. And at the helm: Billy Wilder, winner (at the time) of three Academy Awards, whose participation was reportedly also a condition of Marlene Dietrich's.

Wilder also co-wrote the screenplay, beefing up the part of defense barrister Sir Wilfrid Robarts for Sir Charles Laughton. Laughton, whose previous Christie experience included playing Poirot in the adaptation Alibi, threw himself into the role, and even lobbied for a role for his wife Elsa Lanchester. She got it, of course, playing Sir Wilfrid's nurse Plimsoll, and the film opens with their bickering. Tyrone Power is the accused, older and much more American than what Christie wrote, so the script includes a flashback establishing him as an ex-G.I.

That flashback includes a cabaret song and a riot, the better to show off the famous legs of leading lady Dietrich, who would rank the role among her all-time favorites. Indeed, it is hard to disagree - though much mocked, even by Lanchester and Laughton, for plastic surgery and "tape-lifts" that left her face more or less immobile, the final twenty minutes belong to her and her alone; the emotion she packs into a "Damn you!", the genuine shock at the final turn, the flood of emotions that rock her...it's quite a sight! Once you see just what part she plays in the film's many twists, it's difficult not to rank it among her best.

Those twists are part of the film's appeal, but were also a great concern for the studio. The last ten pages of the script were kept from the cast until the final days of shooting. Visitors to the set had to sign an agreement swearing they would not reveal anything they saw. There's a voice-over during the end credits asking viewers not to divulge the twists to their friends. One poster even used the tagline, "You'll talk about it! But please don't tell the ending!" Intriguing enough for movie-goers to make it the 19th highest-grossing film of the year, I suppose.

That same secrecy, however, is believed by many to have dealt a blow to Dietrich's Oscar chances. As I said, her performance and those twists are interlocked, and the studio didn't know how to push one without spoiling the other. Dietrich was confident enough in her chances to record a new intro to her Vegas show referring to her nomination. But despite great reviews and a Golden Globe nod, Dietrich was not among the nominees for the 1957 Academy Award for Best Actress. Dietrich was crushed.

Not that anyone else had reason to be. Six nominations in all, including Best Picture of the Year! In that rare year Best Picture and Best Director lined up five-for-five, Wilder found himself up against Bridge on the River Kwai's David Lean, 12 Angry Men's Sidney Lumet, Peyton Place's Mark Robson, and Sayonara's Joshua Logan. Laughton received a Best Actor nomination, and Lanchester received one for Best Supporting Actress (she won the Golden Globe in the same category). 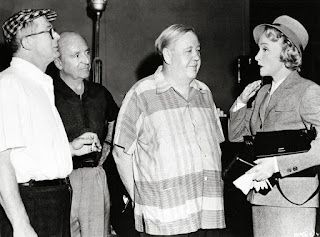 A hit with audiences, critics, and the Academy, the film has proven its worth even more by its longevity. In 1982, CBS made a TV Movie starring Diana Rigg, but it wasn't the play that was the inspiration; it was a direct remake of the film, Nurse Plimsoll and all. In 2008, the American Film Institute ranked it Number Six on its list of the Top Ten Courtroom Dramas. And in 2016, it was announced that the film would be remade, with Ben Affleck as star and director - in Hollywood, imitation truly is the sincerest form of flattery.

Christie herself said it was the only adaptation of her work that she wholeheartedly approved of. Such was not the case for a film based on one of her own favorites, Endless Night - but we'll talk about that tomorrow....