All month long, we're celebrating the Queen of Crime as she and her works appeared on screen, with a grand finale of five Murder on the Orient Expresses the first full week of November. Today, and all this week, we're focusing on her standalone works.

My favorite Agatha Christie is And Then There Were None, and I am not alone. The best-selling novel she ever wrote, it's inspired countless spoofs (Family Guy did one), two stage plays (including one written by Christie herself), and a number of film adaptations. The plot concerns ten complete strangers summoned to a remote location, where a recording accuses each of them of having committed and gotten away with murder. One by one they start to die, and each death mirrors a verse in a poem tacked up in each of their rooms - "Ten little soldier boys went down to dine, one choked himself and then there were nine," etc. Not only that, with each death, a figurine from a set of ten is either broken or spirited away.

Yes, it's the classic slasher film premise, and it was Christie who started it all. Boy, did I have my pick of which one to do for this entry! Do I go with the classic black-and-white 1945 version directed by René Clair - not only did it use the "happy ending" Christie wrote in for the stage version, it also changed character names, crimes, identities, and levels of guilt? Maybe the groovy 1965 version with Bond Girl Shirley Eaton running about in a towel in a Swiss castle? The 1974 one with Charles Aznavour performing his real-life hit "The Old-Fashioned Way" in a hotel in Iraq? Bollywood's Gumnaam?

In the end, I went with the only film to preserve Christie's text word for word. Yes, this almost meant And Then There Were None, but that version included a lot of coke and alcohol and people being haunted by the Great War and secret lesbianism and whatnot. I'm talking about the only movie to film Agatha Christie as though they had no screenplay, just the book in everyone's hands. I'm talking about... 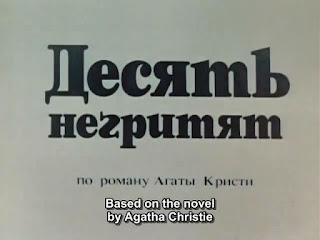 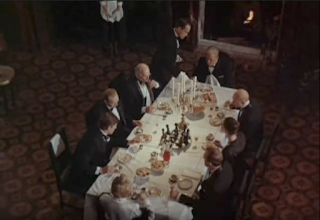 Yes, leave it to the Russians to be the first to adapt Agatha Christie completely faithfully. This version of And Then There Were None has no musical numbers, no glamorous getaways, no real sense of fun. The island is a bunch of rocks stacked narrowly, the house balancing on the edge of a cliff. The score is a low hum (most of the time). Even the requisite love scene between the youngest members of the cast, which evolved from chaste flirting to kissing to love-making in previous versions, becomes a rape scene, the only divergent detail. There's nothing good about this island. There's nothing good about these people.

Is it any surprise that this is, therefore, the best version of the story? Oui, I said it! With such a dour tone, it still holds one's interest. Director-writer Stanislav Govorukhin sees no need to juice things up, just present it as it was written. Ten complete strangers being murdered one by one, with no hope for rescue: shouldn't that be good enough? While other versions softened certain characters, even changing backstories to make them innocent of their crimes, this one keeps the part where our "heroine", Vera Claythorne, dismisses the deaths of 20 East African tribesmen at the hands of another guest as negligible because, "after all, they were only natives." Philip Lombard, the devil-may-care hero of previous versions, is here haunted by his crimes, waking up in a cold sweat after a nightmare - eerily shot in black-and-white. 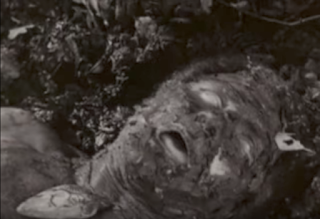 It even keeps the original title, and here is where some controversy arrives. Recent editions of the novel, as well as a new stage version and the 2015 miniseries, use the more widely-known And Then There Were None, taking place on Soldier Island, with the poem being "Ten Little Soldier Boys". The edition of the novel I first read, Christie's play, the film adaptations of 1965, 1974, and 1985, and the subtitles on this version, use the widely-accepted Ten Little Indians, same name as the poem, with events happening on Indian Island (so named because its shape resembles the head of an American Indian).

Neither one is Christie's original title, and the subtitles are purposely mistranslating. The book was initially published in Europe as Ten Little Niggers, named for a tune made popular in British minstrel shows by, I shit you not, Christy's Minstrels. That title is still in use around the world, including France (Dix petits nègres) and Germany (Zehn Kleine Negerlein). There was no fucking way the American publishers were going to use that word, so they went with the far less racist...Indians. But Desyat Negrityat is certainly a correct translation of the original, and if you doubt it, take a look at the statues used throughout the film. 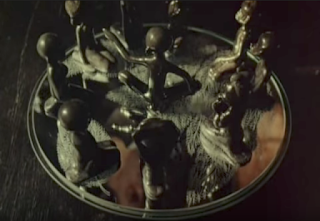 Hell, look at the film poster! 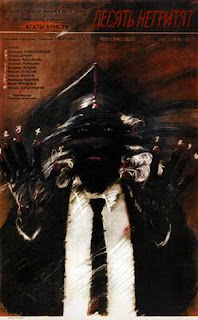 Here then, for better and for worse, is a film that is not sanitizing any aspect of Christie's novel. The racism, the pettiness, the animalism of people, the doom-and-gloom - they are preserved, along with the ending, one of the bleakest Christie ever wrote. Chilling in its execution, classy in its style, Desyat Negrityat is a Christie adaptation for the ages. She would have been proud to see it.

Tomorrow, one that she would not be proud of. One, indeed, that was legally forced to remove her name and all reference to the original work from the final product. Join us for Innocent Lies...

Email ThisBlogThis!Share to TwitterShare to FacebookShare to Pinterest
Labels: Agatha Christie, And Then There Were None, Desyat Negrityat, Stanislav Govorukhin, Ten Little Indians