Sweet Streams Are Made Of These

The following titles are available right now on Netflix. 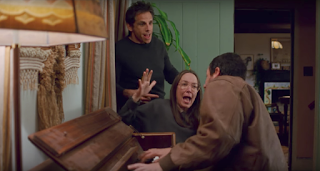 
Three siblings (but mostly the brothers) and their prickly relationship with their self-centered artist father. Baumbach's perfected familial patois - the repetitive conversations, the interruptions, the assumptions. Great performances all around, but especially from affable asshole Dustin Hoffman and Elizabeth Marvel, who's a...well, marvel...as the oft-overlooked sister. Two wonderful ditties, too! Two!

Cannibal horror, Redford-Fonda romance...and some non-streaming titles like Only the Brave after the jump....

Society's rejects are put in a desert wasteland to fend for themselves, I guess. Pros include the production design, the cinematography, and Jason Momoa; Suki Waterhouse intrigues. But Jesus, what a slog. Felt bamboozled - seduced me with cannibalism and amputation, then just petered out. And what the fuck's going on with Keanu Reeves' character?

Kooky Canadian horror flick that traps a group of people in a rundown hospital, while mysterious cloaked figures gather outside. Impressive makeup and visual effects, conjuring blood and beasties with alarming realism. Very little exposition, few direct answers provided, lots of blood and matter on the walls. Just the way I like it.

French horror about a vegetarian in vet school who begins to develop a taste for raw, bloody meat. Stomach-churning at times, impossibly sexy at others. Garance Marillier is the feral leading lady - darkly funny, superb. Fantastic score by Jim Williams. 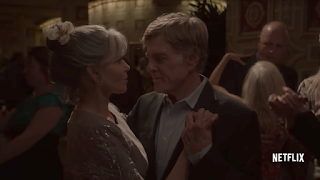 Our Souls at Night
dir: Ritesh Batra
scr: Scott Neustadter & Michael H. Weber, based on the novel by Kent Haruf

Pleasant drama about a widow and widower who begin dating. It's that simple, and that aimless. Nice to see Robert Redford and Jane Fonda together again, and they're wonderful together. But then it quickly focuses more on Fonda's family and Redford's relationship within that milieu, and honestly I couldn't care less about that. Kind of a whiff.

This is an extremely bizarre movie, but I like all the actors in it. Julianne Moore's best-in-show as the villain - she plays it like Diane Keaton in that scene from The First Wives Club where she buys out her ex-husband's partners' stake in their advertising firm. Why are the VFX always so cheap-looking in these movies, though? Probably the worst offender in that category since Wonder Woman.

Girl relives the day of her death until she can solve her own murder. Great fun, neat denouement. Rachel Matthews the standout as a sorority mean girl. See it, have a good time!

Only the Brave
dir: Joseph Kosinski
scr: Ken Nolan and Eric Warren Singer, based on the GQ article "No Exit" by Sean Flynn

True story of the Granite Mountain Hotshots, a team of wildfire firefighters from Preston, Arizona - a story I didn't know, so I was unprepared for the gravity. The dialogue is often very written, but the cast pulls it off. The filmmakers respect the subject matter, and while there are plenty of harrowing scenes, they never feel milked for false sentiment. No clunky exposition describing what they're doing or why, just men going about their jobs.

What stands out the most, though, is the relationship between those men, the extended family. They help with your newborn, stay up with you in the hospital, hold your loved ones when you can't; they push you beyond your limits, know just what buttons to push, and mock you louder than anyone. It's a brotherhood. Great performances across the board, with Josh Brolin leading as the Hotshots supervisor.

Email ThisBlogThis!Share to TwitterShare to FacebookShare to Pinterest
Labels: 2017, Buster's Mal Heart, Happy Death Day, Kingsman: The Golden Circle, Only the Brave, Our Souls at Night, Raw, reviews, The Bad Batch, The Meyerowitz Stories (New and Selected), The Void