All month long, we're celebrating the Queen of Crime as she and her works appeared on screen, with a grand finale of five Murder on the Orient Expresses the first full week of November. Last week, we talked all about Hercule Poirot. Today, and all this week, we're looking at the last person anyone would expect to have a mind for murder - the little old lady of St. Mary Mead, Miss Jane Marple.

The star of twelve novels and 20 short stories, Miss Marple was introduced in The Murder at the Vicarage as a nosy, gossiping busybody, cynical about people, always expecting the worse. Many's a reader or viewer who will point to the inconsistency between this Marple and the softer, kindlier little old lady we grew to love, but the difference is not so keenly felt by me. One must notice that her eyes are described as "sparkling" when she hears of murder or is in the middle of sleuthing. And there's no doubt that she manipulates people, usually maids, into doing the dirty work for her, telling them to be careful before sending them into the lion's den with her marching orders. Oh yes, Miss Marple may seem like a nice old lady - and she is! - but she has a taste for scandal and shenanigans.

Agatha is on the record as preferring Miss Marple mysteries to Poirot ones. They were easier to write because she was easier to write. Many of them do not feature Miss Marple prominently at all - instead, she drops in every now and then to hear a bit of tattle, before bringing all the threads together in a thrilling yet humbly-delivered denouement. Her books also provide more observations about a changing England, especially the post-War novels - but one is bound to notice such things in a sleepy village.

Popular on television, Miss Marple has only come to the big screen a handful of times. Today is about that very first time. Join us after the jump, won't you, for.... 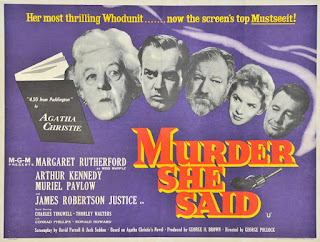 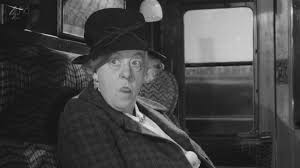 Miss Marple witnesses a murder on a train, but since no body is found, no one believes her. She goes undercover as a maid at a large estate where the body may have been hidden.

Based on 4.50 from Paddington (published in the United States as What Mrs. McGillicuddy Saw!), Murder, She Said was not just the first of a four-film franchise starring the spinster sleuth - it is also the only one based on a Miss Marple novel! The next two entries, Murder at the Gallop and Murder Most Foul, were very loosely based on Poirot novels, while the final flick, Murder Ahoy!, was an original screenplay based on the filmmakers' interpretation of Miss Marple. Yes, this is an MGM-Christie film, and as mentioned in our look at The Alphabet Murders last week, these weren't just mysteries, but comedy vehicles showcasing the talents of their stars.

And what a star they had in Margaret Rutherford! Billed as "The Funniest Woman Alive!" by the time of Murder at the Gallop's release, Rutherford was already known for her definitive interpretation of Madame Arcati in Noel Coward's Blithe Spirit, a part she played on the London and Broadway stages as well as on film; fitting, as Coward wrote the part for her. Seventy years old when she began the Miss Marple franchise, she accepted on two conditions: instead of costumes, she would wear her own clothes, and the filmmakers would include a role for her husband, Stringer Davis. Done and done - throughout the series, Miss Marple wears sensible tweed, brooches, and hideous gowns, while sleuthing alongside the loyal but slightly slow-witted librarian, Mr. Stringer. 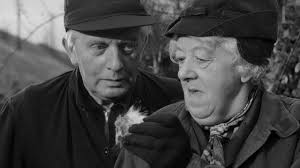 Thank goodness they gave in because while Margaret Rutherford is certainly not the Miss Marple of the books, her version is a thrill to watch. Take today's film - in the novel, Miss Marple's friend witnesses a murder and tells dear Jane all about it. Our heroine stays home but sends another, much much younger friend, Lucy Eyelesbarrow, undercover as a maid in the house where the body may have been hidden. It's not until the very end that Miss Marple suddenly re-appears, ready with a trap for the killer.

Not so with Margaret Rutherford. In the film, she goes undercover, she breaks into old outbuildings to find clues, she searches bedrooms, she nearly gets murdered, and she gets a marriage proposal before the end of the final reel. Whether that's an improvement on the source material is up to the viewer; personally, I love the idea of Miss Marple, already raising eyebrows with her talent for deduction, further exceeding expectations by doing the footwork herself! Here she is, old, unmarried, and a woman, but she's kicking butt, solving crimes, and finding romance. That's cinema! 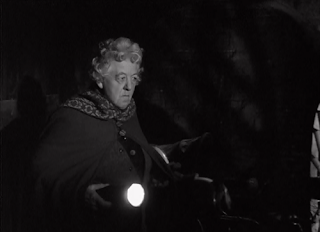 It was also a hit. The film spawned three sequels (as we said), and it is generally acknowledged that her popularity in these films helped net her the Academy Award for Best Supporting Actress (The V.I.P.s). Christie herself dedicated a Miss Marple novel to Rutherford "in admiration", though she thought Rutherford's co-star Joan Hickson would be better suited for the role...when she was old enough (as we'll see on Thursday, she was right!). And you know how you love the classic television series Murder, She Wrote, starring Angela Lansbury? Well, guess what flick that title's referencing?

Eventually, all franchises lose their steam, and such was the case here. After Murder Ahoy!, Rutherford would reprise the role one last time, for a cameo in The Alphabet Murders. It would be 15 years before Miss Marple would return to the big screen, and this time, she'd have to fight for screen time.

But that's a story for tomorrow.