All month long, we're celebrating the Queen of Crime as she and her works appeared on screen, with a grand finale of five Murder on the Orient Expresses the first full week of November. Today, and all this week, we're looking at the main source of her bread and butter, the little Belgian himself, Hercule Poirot. We've discussed some of his big screen adventures, like The Alphabet Murders and Death on the Nile. Yesterday, we talked about the only series - anime, at that - to present a successful crossover of Poirot and Marple. Today, another crossover - that of fiction and reality! 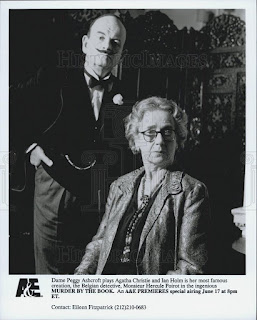 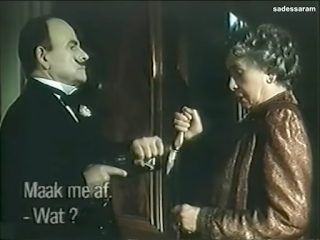 With the outbreak of World War II, Christie was genuinely uncertain about her chance of survival. Besides that, after twenty years, she was equally uncertain about Poirot's longevity within popular culture. And so, in addition to a final Miss Marple mystery, she set about writing Poirot's final case, one which includes an assurance that this would undoubtedly, definitively, be the last word on Poirot: his death. Both final novels were tucked away in a vault, not to be published until after Dame Agatha's death. Christie wound up changing her mind, and Curtain: Poirot's Last Case was released in September 1975; four months later, Christie herself passed away, age 85.
It helps to know some of this before watching Murder by the Book, because Murder by the Book is an odd little telefilm about Christie coming to terms with the end of Poirot. The manuscript is ready, her publisher has made his notes, all that's needed now is her final say-so. Ah, but late one night, a certain individual arrives to stop Christie from killing her creation: Hercule Poirot himself! 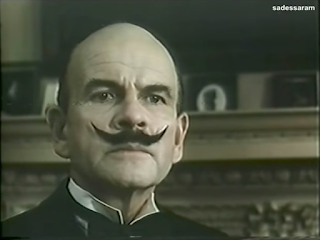 Over the course of 50 minutes, there's a back and forth between Poirot and Christie as he accuses her of being jealous - jealous because he was the best-seller, not her - and she insists that he must die, not least of all because he's been in his 60s for six decades. Poirot threatens to burn the manuscript, Christie attempts to poison him, and the game of cat-and-mouse continues in between musings about the relationship between artist and art.

Peggy Ashcroft and Ian Holm make great sparring partners; it helps, too, that both are the very image of their characters! If Holm's Poirot looks a little ridiculous, well, go back to the original novels - he did look a little ridiculous! Ashcroft's Christie resemblance is uncanny, though it should be noted that her wits are more about to than the genuine article's were reportedly at the time. 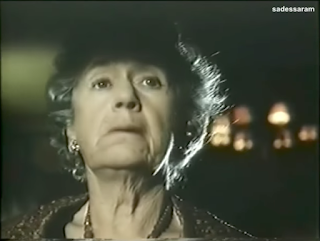 In some sense, the film is about control - Christie must definitively kill off Poirot before another author can attempt to take over, "like James Bond," she seethes, a reference to the 1968 publication of Colonel Sun by Kingsley Amis, four years after Ian Fleming's death...but also perhaps an anachronistic reference to John Gardner's run of Bond novels in the 80s; Murder by the Book was, after all, released in 1987, at which point Gardner had published eight Bond books. At the same time, Poirot insists that he no longer belongs to her, so universal a figure is he, beloved by all the world - and, Poirot being Poirot, he demands he have the last word on his fate.

In reality, both would be thwarted. Poirot did die, and in a rare honor for a fictional character, received an official obituary in The New York Times. As for Christie, while her estate was fiercely guarded by daughter Rosalind Hicks for decades, of late the remaining representatives have been more lax in honoring the author's wishes. Perhaps that explains why, 39 years after his death, Poirot returned in The Monogram Murders, written by Sophie Hannah - and while that novel and its follow-up Closed Casket take place in the 1920s, thereby filling in some gaps in the great detective's career, one can't help but wonder if we should allow Hercule to rest in peace.