Earned It: A Pocketful of Rye

All month long, we're celebrating the Queen of Crime as she and her works appeared on screen, with a grand finale of five Murder on the Orient Expresses the first full week of November. Today, and all this week, we're looking at Miss Jane Marple. Yesterday, Oscar winner Helen Hayes brought Jane to the small screen; today, the most prolific TV Marple. 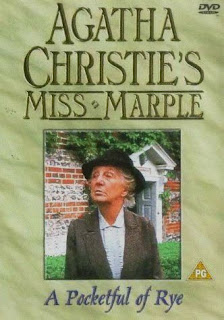 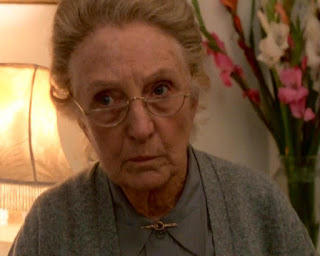 There is no Miss Marple like Joan Hickson's Miss Marple, and that's because she has something that no actor before her (and obviously since) could rival: Agatha Christie's approval.

Back in 1945, Hickson played Miss Amabel Pryce in a stage production of Christie's Appointment with Death, adapted by Christie herself. Though just nearing forty herself, Hickson received a note backstage from the Queen of Crime, saying: "I hope one day you will play my dear Miss Marple." Hickson was, reportedly, very surprised, and not just because she was still forty years too young for the role; Miss Pryce is a daffy character, highly suggestible, mostly comic relief. It would be almost twenty years before Hickson finally appeared in a Miss Marple adaptation - the film Murder, She Said, in which she plays housekeeper Mrs. Kidder. 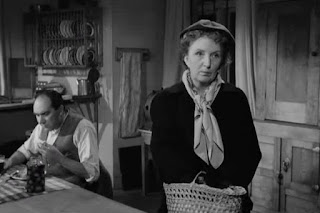 Her next stop on the Christie train was the 1980 made-for-TV adaptation of Why Didn't They Ask Evans?, which both proved to be a success and received approval from Christie's daughter Rosalind Hicks. Based on that success, the BBC commissioned a new series of television films starring Miss Marple. And who better to play the role than someone from the proven Evans cast? Someone who, at 78, was now the perfect age? Someone who Christie herself wanted?

It was Joan Hickson's time to shine.

With few exceptions, the Hickson Marples adhere closely to their source novels, preferring to let the actors and mystery speak for themselves. They're quieter, more straightforward, and any deviations from the material are barely noticeable.

Take today's episode, A Pocketful of Rye, in which a tycoon is murdered and Miss Marple appears halfway through when she realizes a girl she trained as a housemaid worked in said tycoon's home. While Hickson appears now and then throughout episode one, reacting to newspaper coverage of the murder, she does not actually come onto the scene herself until episode two, more than 50 minutes into the story. Up to that point, we've been following the investigation of Detective Inspector Neele, played by future Oscar nominee Tom Wilkinson. 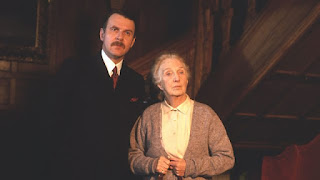 When they do meet up, their allyship and the rope Neele gives Miss Marple in her own sleuthing, is quickly and convincingly handled. Besides which, her connection to the household and her perceived dottiness (is it affected? Hickson cleverly leaves us in doubt) makes the suspects more comfortable in opening up. And when she almost apologetically solves the case, it all makes sense - many's a Christie adaptation where so much time is spent on the camp, they forget the clues.

Which is a shame, because the Hickson movies prove that a mystery need not have some capital-a ACTING to be funny. The wit is dryer, the barbs somehow more pointed. Miss Marple praising her latest maid on finally getting a small detail right, it's shady as hell, as is one righteous woman's summing up of her sister-in-law's country club visits: "Clubhouse? Whorehouse." That one's probably the bluntest joke, but with few obvious witticisms and no "mood" scoring, I found myself laughing throughout.

Hickson wrapped up her tenure as Miss Marple in 1992 with the oft-adapted The Mirror Crack'd from Side to Side. The premiere of that episode cemented her iconic status - to this day, she is the only actress to have played the role in adaptations of all twelve novels.

Sadly, it would be a long time before the short stories were seen to - in fact, that didn't happen until Julia McKenzie took the reigns in 2008. But more on that tomorrow....