All month long, we're celebrating the Queen of Crime as she and her works appeared on screen, with a grand finale of five Murder on the Orient Expresses the first full week of November. Today, and all this week, we're looking at Tommy & Tuppence. So far we've covered their early TV days - and now, their most recent appearance on the small screen...

In 2013, ITV aired the last episodes of signature series Poirot and popular reboot Marple, effectively ending an era of televised Agatha Christeries. Just two months after the final episode of Marple was broadcast, rival network BBC announced it was ready to re-stake its claim on the Queen of Crime, announcing the production of two miniseries in time for Agatha's 125th birthday in 2015. One of those was the three-episode And Then There Were None, which is a masterpiece, highly recommended. The other was Partners in Crime.

At the time of the announcement, Tommy was already cast (Jessica Raines would come aboard Tlater), because it was his idea in the first place. Comedian David Walliams, known for his collaborations with Matt Lucas on shows like Little Britain and Come Fly with Me, brought the idea of a Tommy & Tuppence reboot to the BBC, with Agatha Christie Ltd's Hilary Morgan support and company. Walliams, who earlier appeared in Marple: The Body in the Library, was apparently attracted by the idea of a couple bickering over a corpse. More than that, after re-reading the novels and short stories, Walliams felt that they were more worthy of celebration, to stand alongside Poirot and Marple as equals.

Naturally, a number of re-workings came. When picking an age for the Beresfords, the producers split the difference - late-30s/early-40s, with a son away at school. Mr. Carter of the Secret Service was still Mr. Carter of the Secret Service, but was also Tommy's uncle. The bellhop-turned-assistant Albert was greatly changed: he became a middle-aged, one-armed chemistry teacher frequently consulting for the Service. And of course, just as they picked an age for the Beresfords, they had to pick an era. The Roaring Twenties, as in the original stories and series? The War Years? The late-60s/early-70s?

No, no. These are spy thrillers, and what era screams that more than the Cold War? The action was updated to the 1950s, which meant Nazi spies would now become Soviet spies, in the adaptation of... 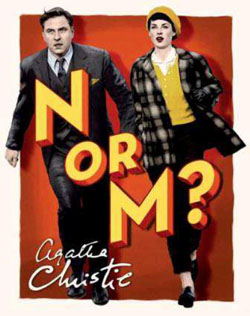 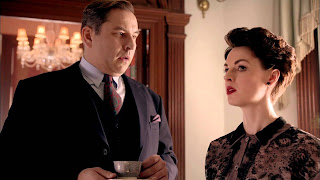 About halfway through the first episode of N Or M?, I said to myself, "This is too much." In the book, which we discussed yesterday, Tommy and Tuppence Beresford are at work rooting out a Nazi spy at a guest house by the end of Chapter Two. In the series, the clue that gets them to that guest house on the hunt for either Agent N or Agent M  is given about fifteen minutes before the credits. Like many modern adaptations of Christie novels, the plot is overcomplicated, the setup way too long.

Tommy and Tuppence are no longer dealing with a spy plotting an invasion, but a rogue double agent who's kidnapped a leading atomic scientist for their own nefarious purposes. The suspects, in my opinion, become a bit more obvious, the red herrings not so convincing. It does do away with one of the novel's odder bits, involving a specialized tracking "device" used by Tuppence, and it turns the extra fat of the Cayleys into the amusing and rewarding Mintons. By and large, though, the story becomes kind of a mess, and the second killing - so effective and jaw-dropping in the novel - feels shrug-worthy. The victim himself is a red herring, so like...who cares? The high point, storywise, is the finale, which confronts Tuppence with the reality of liquidating the opposition. 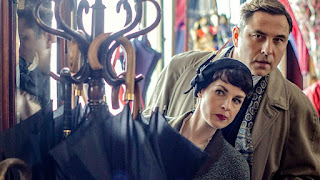 But as I've said before, the Tommy & Tuppence stories are about the chemistry between the two leads - how do they fare in that regard? Actually, not poorly. While more insufferably whiny than their 80s counterparts, Walliams and Raine convince you that this is a couple that sees each other, complements each other, and if you can't stand them, well at least each of them found someone who did. It just takes until the second half of Episode Two, ninety minutes into the story, for them to find a groove. Not helping is the sheer incompetence of the Beresfords - part of the delight is seeing this happy-go-lucky couple navigate situations that seem way above their heads, that's true. But here, Tuppence breaks cover within the first ten minutes of their investigation, while Walliams more or less bumbles about.

Despite an entire collection of short stories and two more novels remaining, the BBC did not renew Partners in Crime for a second season. Not a surprise, though at least they made an effort to present the Beresfords as a happy couple. Not so when ITV inserted Miss Marple into one of their stories, which we'll discuss tomorrow....