Sisters Are Doing It For Themselves: By the Pricking of My Thumbs, 2006

All month long, we're celebrating the Queen of Crime as she and her works appeared on screen, with a grand finale of five Murder on the Orient Expresses the first full week of November. Today, and all this week, we're looking at Tommy & Tuppence. So far, we've talked about their youthful escapades and their adventures as they approached middle age. We move into their golden years today, but with a twist...

Before Julia McKenzie took over the role of Miss Marple, Geraldine McEwan spent three seasons putting her own mischievous mark on the role. Following the success of the first season, it became clear that ITV was going to keep the train going as long as they could. Thus began the inserting of Miss Marple into non-series cases like The Sittaford Mystery. That announcement was controversial enough for fans, but it was pure scandal when it was announced that Miss Marple would be teaming up with another established Christie detective, in.... 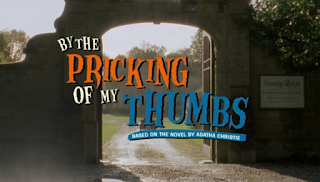 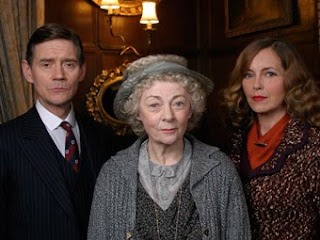 Like the novel on which it is based, By the Pricking of My Thumbs follows the Beresfords in their 60s. The children are grown, the couple is bored, and when they visit Tommy's clever Aunt Ada in the nursing home, Tuppence latches on to something said by one of the other residents, a friend of Ada's: "Was it your poor child?" Tuppence's suspicions that the old lady may be remembering a murder deepen when she disappears the same night Ada dies.

Unlike the novel, on returning to the nursing home to settle things, Tuppence runs into another visitor who shares her suspicions: Miss Jane Marple. And since no one else believes them, least of all Tuppence's condescending Secret Service agent-husband Tommy, they decide to strike out on their own.

Obviously, the biggest difference is the relationship between Tommy and Tuppence, as evidenced by the way I organized the cast list. Tommy is not part of the proceedings at all, except to use his official capacity to follow up leads Tuppence and Jane discover; he's been relegated to the doubtful lawman. Before that, he treats Tuppence like a burden, impatient with her appeals to join him in his missions like the old days. The frustration has turned Tuppence to drink, and while I'm not sure whether or not she qualifies as an alcoholic, it's clear from conversations with Tommy and phone calls with her children that she has a problem. Tuppence feels if she and Miss Marple can prove there is a case to solve, and then solve it, maybe her husband will take her seriously again.... 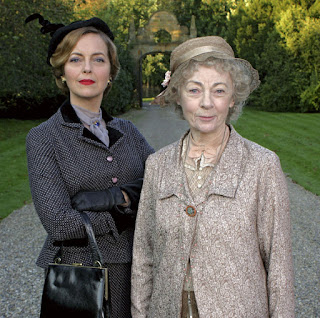 It's a major thing, turning Christie's perfect couple into a marriage on the rocks, but the McEwan Marples' whole raison d'être, besides solving murders, was exploring women's place in 1950s British society. Sometimes it was already there in the text (A Murder is Announced, 4.50 from Paddington), other times it was squeezed in there (The Body in the Library, The Sittaford Mystery). But I don't think any episode explored it like this one. Tuppence was Tommy's equal, but society demanded that she stay at home with the children while Tommy continued the work he had needed her for. As a result, Tommy started believing his own bluster, the children dismissed Tuppence's remembrances as envious exaggerations, and Tuppence dove deeper into the bottle. It wasn't right.

The rest of the episode isn't quite so deep. There's a subplot about a rising child actress, the most half-hearted love triangle you've ever seen, a sad dad, and an innkeeper who also has the last name Beresford, but that leads...nowhere (at all, it's bizarre that it's even included). It aims for high camp, but only Charles Dance, as a sarcastic, agnostic vicar, pulls it off without embarrassment. Which is a shame, because the actual mystery, including its solution, is chilling, and allows both Tuppence and Miss Marple to do what they do best: respectively, take action and expose secrets to an entire village.

Email ThisBlogThis!Share to TwitterShare to FacebookShare to Pinterest
Labels: Agatha Christie, Anthony Andrews, By the Pricking of My Thumbs, Geraldine McEwan, Greta Scaachi