Reflections in an Olden Eye: Murder with Mirrors, 1985

All month long, we're celebrating the Queen of Crime as she and her works appeared on screen, with a grand finale of five Murder on the Orient Expresses the first full week of November. Today, and all this week, we're looking at Miss Jane Marple. We've seen her on the big screen; now, a look back at one of two TV Marples of the 80s... 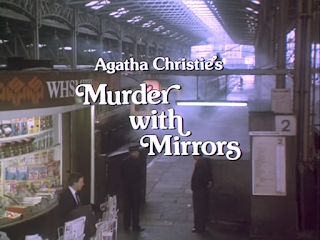 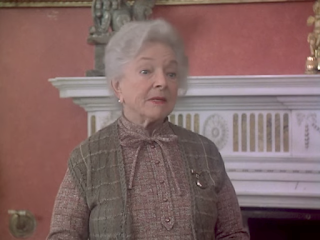 Agatha Christie was quite A Thing for 1980s television: Tommy & Tuppence for London Weekend Television, Joan Hickson's Miss Marple for BBC, The Agatha Christie Hour. for Thames Television. But America's CBS Network was truly devoted: nine Agatha Christie made for TV movies were produced between 1982 and 1989, three of them featuring Peter Ustinov as Hercule Poirot, and two starring Helen Hayes as Miss Jane Marple.

What made the CBS productions unique was their update, transferring all the stories from the 30s, 40s, and 50s to the present. And God bless them, they managed to do it almost seamlessly, and credit to whoever it was picking the novels. There is nothing uniquely period about the source novels for A Caribbean Mystery or Murder with Mirrors, and so you hardly notice it when the cars are modern, the hair is permed, and the characters watch color TV. All of that takes a backseat to the mystery.

And what a mystery Murder with Mirrors is! Miss Marple goes to visit a supposedly ailing friend, whose large property serves as a home for wayward youth; said friend's stepson is mysteriously murdered, and of course, Miss Marple investigates.

Had my druthers, this, and not The Mirror Crack'd, would have hit the big screen. The story is a genuine puzzler, expertly and economically adapted by George Eckstein, who respects the source material but still manages to squeeze some additional excitement, including a car explosion! Meanwhile, two-time Oscar winner Hayes is one of the best Miss Marples to hit the screen. One critic deemed her too old at 84 to play the role - but that girl is running around, tossing off questions and quips a mile a minute, and is sharp sharp sharp. She brings to life both Miss Marple's calculated vagueness and her alert perceptiveness.

There is no doubt, however, that the most fascinating aspect of Murder with Mirrors is Bette Davis. Davis, who made her name as badass bitches, plays against type as a quiet, noble-hearted angel. Even the revelation of the killer does not dampen her affection for them. 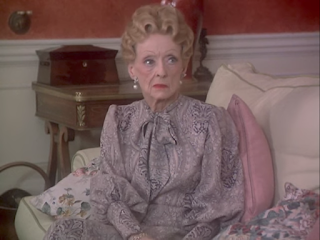 Just two years previously, Davis had undergone mastectomy for breast cancer and, two weeks later, suffered four strokes. She fought any debilitating effects with physical therapy and her characteristic nerve, but the left side of her face was paralyzed, as was much of her left arm. Murder with Mirrors was her first role post-stroke, and it shows. Bette's life was her work, and I would never begrudge her that, nor do I blame a TV network getting more Star Power for their production. Still, it's a little painful to watch, and she's unable to fully emote the way she wants to.

I can see why the role would appeal to her. Carrie Louise is a woman in perfect health who everyone else thinks of as fragile. When she is told that she may be being poisoned, she is shocked, not by the idea of being a victim of murder or an object of hatred, but because she does not feel the effects. Likewise, Davis is a woman who people may have written off (many, many times before), but who refuses who go. Half-paralyzed, she still shows up. She knows her lines. And she wipes the floor with half the 20-somethings in the ensemble.