All month long, we're celebrating the Queen of Crime as she and her works appeared on screen, with a grand finale of five Murder on the Orient Expresses the first full week of November. Today, and all this week, we're looking at the main source of her bread and butter, the little Belgian himself, Hercule Poirot. We've discussed some of his big screen adventures, like The Alphabet Murders and Death on the Nile, but today, we're "drawn" to a more "animated" mystery... 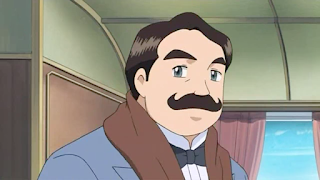 When you're the only author in the world who can rival Shakespeare, you tend to catch on in unexpected countries. Maybe it's my own lack of history speaking, but I've always found it fascinating that, besides India and the UK, Christie adaptations are most prevalent in Japan. There's The Hollow, adapted in 1985 as Dangerous Women; there's the recent And Then There Were None mini-series; they even did Murder on the Orient Express, which we'll discuss later. 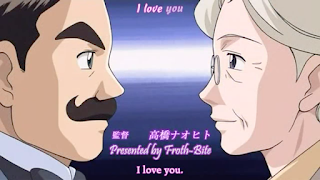 It's not the first time Poirot and Marple have been canonized as being in the same universe: 1965's Poirot flick The Alphabet Murders brought in Miss Marple for a brief cameo, and even Dame Agatha herself, while insisting that the two would drive each other crazy were they to crossover, brought supporting players from their respective adventures together in The Pale Horse. This series, though, finds a way to adapt short stories and novels starring the Queen of Crime's most popular sleuths without messing up their particular "vibes". And the key to it all is Maybelle West. 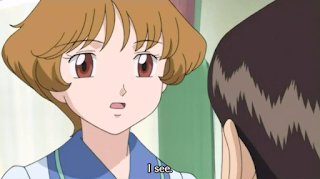 Maybelle is a young girl - never mind how young, the series is vague on that - with a pet duck named Oliver. 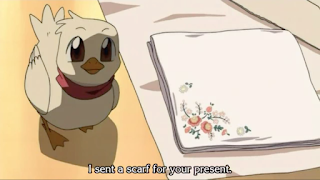 She is also the daughter of Raymond West, best-selling author and the favorite nephew of one Miss Jane Marple. Which, duh, makes Maybelle the great-niece of Miss Marple. When Maybelle isn't visiting Aunty Marple in St. Mary Mead, she can be found in London, where after a chance encounter at the Grand Metropolitan, she's found a position as the assistant to one M. Hercule Poirot. The resulting adaptations are surprisingly faithful to the source material, even finding time to keep the romantic subplots and add in some "business" with Maybelle and Oliver without compromising the case.

The most impressive example of this coup is in the four-part series finale, Death in the Clouds. It opens with Maybelle visiting Aunty Marple, baking cookies for her reunion with Poirot, who is returning to England from France by aeroplane. 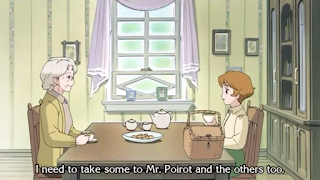 Of course, while Poirot naps on the plane, one of the passengers is murdered, and it is up to him to find out not just whodunnit...but how?

Maybelle, as his assistant, shows up everywhere, and to the writers' credit, they don't just have her watching the proceedings. The original novel has Poirot on his own, no Hastings in sight, and involves a lot of third party love stories and adventures; this adaptation makes Maybelle the sounding-board for Poirot's theories and the confidante of those would-be lovers and adventurers. 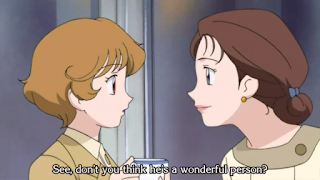 It's quite a clever way to link the profitable franchises of Poirot and Marple without seeming extraneous.

Another great feat of writing, particularly with this episode: how to keep all the information straight without confusing the viewers, many of whom I assume are children? Simple: they label each character when they are introduced: 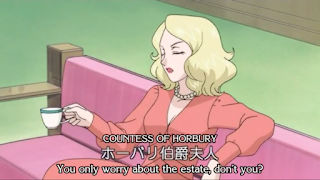 And highlight their position on the plane's seating chart as they give testimony: 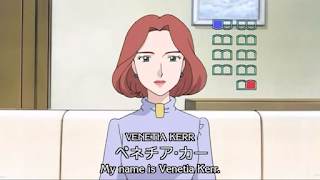 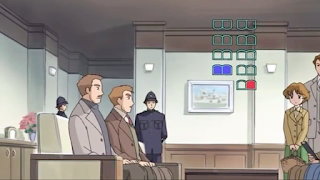 Mind, some characters are given short shrift, and you do lose a lot of the subtleties of facial expression and language, body and otherwise, when it's animated and in a foreign language - but the show is more of an introduction to the intricacies of human relationships rather than a dissection of them. Oh, don't be mistaken; the chief goal, not just of Christie's works, but of this show, is to, as Joanna Lumley says in Marple: The Body in the Library, "plumb the depths of human iniquity." And speaking of Marple, she herself reminds Maybelle of this mid-case: 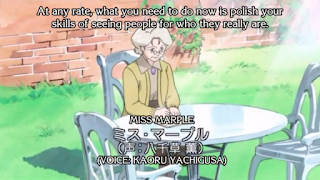 If you can find it, I highly recommend it for fans of Agatha and anime both. A good chunk of episodes can be found on YouTube as well as various streaming sites.

Tomorrow, things get meta as one of my dream Poirots takes on the role to confront Dame Agatha herself!