All month long, we're celebrating the Queen of Crime as she and her works appeared on screen, with a grand finale of five Murder on the Orient Expresses the first full week of November. Next week is Tommy & Tuppence Week, but today, we conclude our look at Miss Jane Marple.

Beginning in 2004, BBC rival ITV began their broadcast of a new series: Agatha Christie's Marple. After Maggie Smith passed on the role, Geraldine McEwan was cast, playing the St. Mary Mead spinster with a gleeful trickster quality, an older forest spirit having a ball! After the filming of the third series, though, McEwan fell and broke her hip; she retired from the role, and other from some voice-overs, seemed to retire from acting altogether. The question, of course, was: who would fill McEwan's shoes? 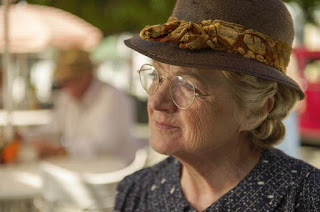 McKenzie brought an entirely different spin to Marple, closer somewhat to the soft-spoken Joan Hickson, but at the same time not quite as apologetic. She'll say, "I'm sure it's nothing," then confidently follow it up with an observation that of course is something, punctuating her point with a look full of meaning. She gets flustered but never terse (McEwan could get downright rude), and while exuding warmth, she openly thinks the worst of people. She just is Miss Marple.

McKenzie brought that cautious glow to eleven episodes, including what I consider to be a high watermark for the series... 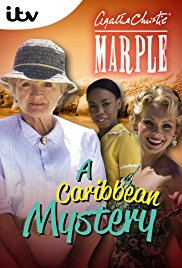 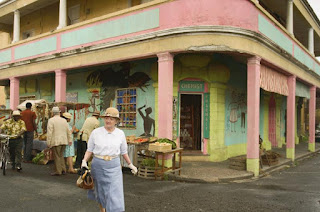 A Caribbean Mystery is my favorite Miss Marple novel. It's one of the few novels where she takes an active role throughout, it takes us out of English villages and into paradise, and the cast is large and international: Americans, Brits, islanders, somebody named Señora de Caspearo!

The plot concerns the death of an old major at a Caribbean resort, where Miss Marple is staying thanks to the kindness of her favorite nephew Raymond. Everyone dismisses it as heart failure, but Miss Marple suspects murder - especially since the major was telling her about a murderer that he may have recognized just before he died.

With some of Christie's most colorful characters and grisliest deaths, small wonder that it's thrice been adapted for television, and this version is undoubtedly one of the best of the ITV run. Just the lush cinematography and beautifully suspenseful score set it apart from the rest. Scriptwise, it brings more layers to characters that even Christie did not fully do justice to: boozer Greg Dyson and aging blonde bombshell Lucky Dyson, for instance, are strangely more sympathetic here, while Evelyn Hillingdon comes across as less of a doormat mourning in private, and more of a strong woman who lives her life her way.

And the Islanders! The maid Victoria is always going to be a star part, but the filmmakers have built up Victoria's boyfriend so that he takes an active part in the mystery, even becoming a suspect - they even address interracial relationships in doing so! There's a voodoo witch, which sounds cringe-y, but she tells Marple that her actual practice is more along the line of hoodoo, whereas she performs fake voodoo for gullible white tourists - Miss Marple thinks it's hilarious, and if they don't physically high-five, they are clearly kindred spirits. 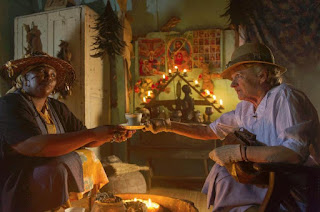 Finally, the inspector that butts heads with Miss Marple is himself an Islander, and while he's one in a series of policemen who frustratingly ignore her observations at first, his reaction to the perceived condescension coming from her and fellow amateur sleuth Mr. Rafiel is kind of marvelous: "Times have changed. You British are no longer in charge." It's the first adaptation I can think of that directly addresses the uneasy relationship between a former colony and the remnants of the Empire.

It's not perfect. The ITV Marples had a habit of adding material that over-complicated the solution: this one has some honest-to-god Scooby-Doo shenanigans involving ghost cosplay! Besides that, there's a distracting cameo by a writers-blocked Ian Fleming, who sits with Miss Marple during a talk on birds of the West Indies given by ornithologist James Bond (Fleming jots his name down). Weird enough on its own, absolutely distracting when it becomes part of the solution.

But carrying the film all the way through is McKenzie. Cozy in the role from her first appearance in Season Four, one can't help but wonder what it would have been like to see her in all twelve novels. And I'm convinced the strength of her performance led to never-before-seen adaptation of Marple short stories - not just "The Blue Geranium" to make The Blue Geranium, but both "Greenshaw's Folly" and "The Thumbmark of St. Peter" to make Greenshaw's Folly, as well as acknowledging "The Case of the Caretaker" influence when adapting Endless Night for the series finale. McKenzie was more than just one of a kind: she was my Miss Marple.