Couple's Therapy: Love from a Stranger, 1937

It's Agatha Christie Month! All month long, we're celebrating the Queen of Crime as she and her works appeared on screen, with a grand finale of five Murder on the Orient Expresses the first full week of November. So far, we've focused on her series characters: we covered the cases of Hercule Poirot, explored small-town murder with Miss Jane Marple, and experienced international intrigue with Tommy & Tuppence.

But man cannot live on bread alone, and Christie admitted that writing for the same detectives over and over could get boring. Luckily, Christie was prolific as hell, so besides the fifty novels featuring the previous characters mentioned, there are another seventeen that do not mention them at all....though some do feature supporting characters from their adventures. That's under her own name; under the name Mary Westmacott, she published six novels deemed "romantic", though this was a catch-all for "women's lit", books about non-murderous women and their relationships. She wrote a great many plays, too, even adapting her own novels for the stage - and when she did, she did not include her famous detectives.

And then there are the short stories. A great many mysteries, yes, but it was in this medium that she really experimented with genres: ghost stories, adventure yarns, investigations into psychic phenomena. What stands out most, though, is not just the variety, but the bleakness of these stories: suicides, dead children, petty revenge.

Not that she completely abandoned her thrillers, but here she made them more, well, thrilling - less detective stories with clues than regular people confronting murder and madness around them. And for some reason, the most popular among these - for a while, at least -  was the short story "Philomel Cottage." It's of that oft-familiar Is My Husband Trying To Kill Me subgenre of thrillers. Here, a woman inherits a butt-load of money, has a whirlwind romance and marriage to a charming man she meets at a party, and only when she is whisked off to a secluded cottage does she begin to realize he may be a Black Widower.

First published in The Grand Magazine in 1924, it was later collected in The Listerdale Mystery (1934, UK only) and The Witness for the Prosecution (1948, US only). But it's real claim to immortality is in a popular stage production, written by and starring Frank Vosper. Popular and well-reviewed on both the West End and Broadway in 1936, the independent Trafalgar Films in turn adapted the production for the screen. In doing so, the filmmakers included some elements of Christie's source material - names, for example - and so were able to credit both the play and short story separately. The title, however, was all Vosper's: 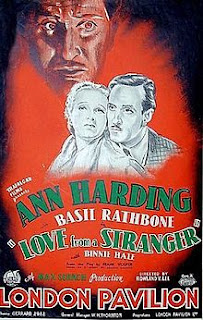 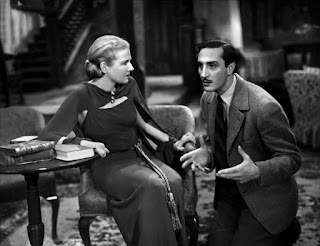 Love from a Stranger changes up some details, opening up the action and the possibilities. Carol Howard comes into money, yes, but here it's because of a French lottery. She offers up her apartment for let, and a prospective tenant, Gerald Lovell, catches her off-guard with his charm. He winds up on the boat with her and her friend to Paris, where she must collect (and spend some of!) her winnings, the perfect opportunity to woo her. They wed, and he whisks her off to a secluded cottage in the countryside, which she considers necessary because of the sharp, sudden "headaches" he gets, a product of his time in the Great War. As his behavior becomes increasingly erratic, Carol fears that he may be plotting her murder.

What's fun about this adaptation are the levels of doubt. In scenes set to "In the Hall of the Mountain King", Gerald is seen in his basement darkroom, developing and then destroying photographs of his new wife, going about the "work" obsessively, almost gleefully - and yet his eyes seem unfocused. He clutches his head in agony,  and suddenly he is quieter and back to his charming self. As he becomes more erratic, prone to fits of rage and less subtly menacing, the audience can understand Carol's suspicions. The man's clearly a nutcase.

But! Is he dangerous? Is he a serial murderer? Through Basil Rathbone's masterful performance, the film casts some doubt on Carol's suspicions, touching on concerns that the deep scars of World War I have not been dealt with by either the veterans or the public. When Carol first brings up Gerald's head injury, it's a passing remark, a footnote that nevertheless necessitates a move to the country; the village doctor is at great pains to convince Gerald to seek treatment. "Philomel Cottage" has our heroine finding American newspaper clippings about a man whose wives have a habit of dying though nothing could stick...and suspects this man is her husband. In Love from a Stranger, Carol sees a photograph of a murderer who vaguely resembles Gerald - but he's clearly decades older, and it's in a book about known true crimes. Is she, then, projecting her own fears onto this story? Even as Gerald grows more menacing, is he capable of murder, or is he just a sick man becoming more ill? 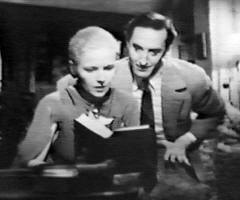 It's a question that's never directly answered, not even in the thrilling climax that has the two stars go toe-to-toe. The whole film leads up to this scene, as evidenced by the American title of the film, A Night of Terror. Spanning a little over 20 minutes, the duet between Rathbone and Ann Harding is hypnotic - one shot was famously greeted with screams in its original release, and damn if that doesn't hold true today!

Ten years later, the film would be remade by Hollywood, keeping the title Love from a Stranger, but moving the proceedings from a contemporary setting to the turn of the century - Gaslight was, after all, released just three years earlier. The popularity of this material on stage and screen guaranteed that it would be Christie's most successful short story...until the one we'll discuss tomorrow...